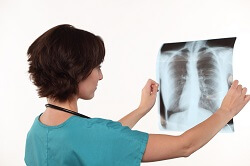 Johns Hopkins researchers report evidence from mouse studies that a “repurposed” drug that would be expected to improve the immune system response of tuberculosis patients may be increasing resistance to the antibiotic drugs these patients must also take.

The findings, which involve one of the new so-called host-directed therapies for TB, are a cautionary note on use of these adjunct approaches designed to fight active TB by increasing the efficiency of antimicrobials drug, rather than working directly against the TB bacillus, as antimicrobials do.

“Our study showed that there are some reasons to be concerned about host-directed therapies. Each agent — even if FDA-approved for another disease — needs to be very carefully vetted in animal models of TB before going too far down the developmental track,” says William Bishai, M.D., Ph.D., co-director of the Johns Hopkins Center for Tuberculosis Research and professor of medicine at the Johns Hopkins University School of Medicine.

In the new mouse study, described in the Sept. 8 issue of the Journal of Clinical Investigation Insight, Bishai and his team used an existing FDA-approved drug  to be “repurposed” for use against TB — a disease that sorely needs new, faster treatments. The medicine, pirfenidone, prevents tissue scarring and is used to treat idiopathic pulmonary fibrosis, a deadly lung disease. Because of pirfenidone’s ability to reduce fibrotic tissue, researchers suspected it could serve as a host-directed amplifying treatment preventing lung damage done by TB germs and accelerating the action of the normal antibiotics. Specifically, TB infection causes fibrous capsules to form in the lungs, where the bacteria can hide from immune and antibiotic attacks. “The bacteria go into a Rip Van Winkle act and hide in these capsules to wait for better times,” says Bishai. Researchers tested whether pirfenidone would reduce the capsule barrier to increase antibiotic penetration and accelerate antimicrobial treatment.

Bishai says the search for such adjunct treatments has been intense, owing to the facts that few new TB drugs have been developed over the past 40 years, new approaches are needed to address resistant TB infections and it takes sometimes decades to bring a new drug to market.

For those reasons, he says, his lab turned to the strategy of screening drugs already approved for human use and whose makeup suggests value against TB infection.

To investigate pirfenidone’s value, the researchers worked with TB-infected mice divided into three groups: one receiving standard TB treatment with the antibiotics rifampin and isoniazid, a second group getting the standard treatment plus pirfenidone, and a third control group getting no treatment.

Surprisingly, Bishai says, his team found that the mice treated with pirfenidone fared worse than the mice from the other two groups. “The biology of immune manipulation sounded compelling, and we expected to see some benefit by adding the anti-fibrotic drug, but surprisingly, it led to lung lesions that were even larger than those in untreated mice. Most importantly, it prevented one of the key antibiotics, rifampin, from getting through to its target bacteria,” says Bishai.

Though no direct interactions were detected between the antibiotics and pirfenidone, giving pirfenidone with rifampin and isoniazid blocked rifampin’s antibacterial effects, he explains.

“It’s very important to use multiple antimicrobials to treat TB because using only a single drug leads to the rapid appearance of drug-resistant strains of the tubercle bacillus that are very difficult to treat,” he says. “By adding pirfenidone, we essentially blocked the one-two punch necessary to eliminate the infection.”

Antibiotic resistance is a major reason that doctors need better adjunctive treatments for TB, Bishai notes. Current treatments take about six months of careful antibiotic administration to clear the body completely of bacteria. “We kill off 99.99 percent of the bacteria in the first two months, leaving only about 1,000 persistent bacteria in these capsules that take four more months to kill,” says Bishai. However, according to the researchers, many patients begin to feel better after the first month of treatment and stop coming back to their treatment clinic for their monthly refills.

This trend has led to the proliferation of multidrug-resistant TB bacteria, which now account for 5 percent of all cases. “What we really need is a rapidly acting therapy that we can hand patients in a one-time buster pack,” says Bishai.

In the U.S., rates of TB infections are at record lows, with an incidence of about 3.5 per 100,000 people. Baltimore sees about 20 to 30 new cases a year. However, worldwide, TB still kills an estimated 1.7 million people per year and latently infects one in four people, with most cases occurring in resource-poor countries, where 95 percent of fatal cases of TB occur.

TB infection is mainly spread by coughed or spat sputum when a person breathes in infected particles. The bacillus can survive outside of the body for up to 88 days. Once inside the human body, the infection causes severe cough, chest pains, fever and chills. While it most commonly affects the lungs, TB can attack any part of the body, including the kidney, spine and brain.

“We are disappointed that pirfenidone doesn’t appear able to accelerate a cure for TB,” says Bishai, “but our study does suggest that physicians who treat people with idiopathic pulmonary fibrosis should consider screening patients for TB before treating with pirfenidone.”

Bishai cautions that their study results have only been seen in mice and do not prove that pirfenidone puts patients at risk.

This research was funded by the National Institute of Allergy and Infectious Diseases under grant numbers AI36973 and AI37856, and support from the Howard Hughes Medical Institute.