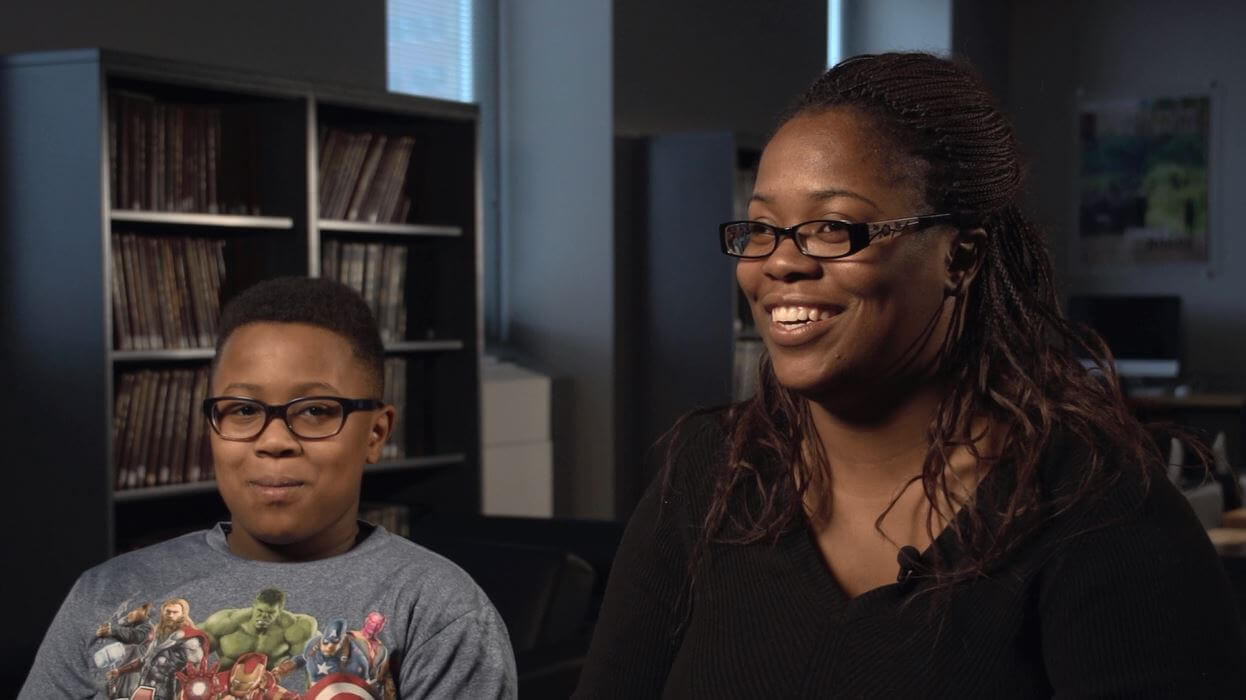 1 2
Malik Fox and Shareki Chaney participated in the study because they wanted to learn how to reduce mouse allergens in their home and improve Malik’s asthma symptoms.
Credit: Jessica Crowell

The results of a new study reveal that a professional pest management intervention was no better in decreasing asthma symptoms in children allergic to mice than teaching families how to reduce the level of allergens shed by mice in the home on their own.

In a report of the study’s findings, published in the Journal of the American Medical Association on March 6, researchers compared professional pest management treatments plus education with education alone and found no significant differences in asthma symptoms or mouse allergen exposure between the two groups. Both groups, however, saw substantial reductions in mouse allergen levels and substantial improvements in asthma.

“Our findings suggest that giving families good instructions about how to reduce the mouse allergens that trigger asthma in their children may be enough to get the job done and, consequently, improve asthma symptoms,” says Elizabeth Matsui, M.D., M.H.S., professor of pediatrics at the Johns Hopkins University School of Medicine and the paper’s lead author.

Previous studies show that in many low-income urban areas, mouse allergens — proteins found primarily in the animals’ urine that trigger allergic symptoms — are present in the homes of nearly all children who have asthma, says Matsui. Because one small study suggested that a professional integrated pest management (IPM) intervention could result in large reductions in home mouse allergen levels, the researchers wanted to know whether professional IPM reduced asthma morbidity in asthmatic children who are known to be allergic to mice and also regularly exposed to mouse allergens at home.

The study, conducted in households in Baltimore, Maryland, and Boston, Massachusetts, included 361 children and adolescents 5 to 17 years old who had asthma. Children and teens were eligible for the study if they had chronic asthma and an asthma exacerbation, such as an Emergency Department visit for asthma, within the last year. The children studied also had to be allergic to mice and have been initially exposed to a bed dust mouse allergen concentration of at least 0.4 micrograms per gram or a bedroom floor dust mouse allergen concentration of at least 0.5 micrograms per gram. Previous work indicates that these allergen levels are associated with asthma morbidity. Children also had to spend at least four nights per week in their primary homes to be included in the study. The average age of all participants was 9.9 years, 38 percent were female, most (66 percent) were from low-income households reporting a household income of less than $30,000 per year, 79 percent were black and 21 percent were Hispanic.

The children received IPM in treatments, with a two- to 2.5-hour initial visit followed by a one-hour booster visit one to two weeks later to reset traps and complete unfinished work from the initial visit. Mouse infestation was assessed every three months until the study ended. If infestation recurred or persisted, families in the professional IPM plus education group could receive up to three additional IPM treatments throughout the study’s duration.

The education only group of the study received one home visit from members of the research team, in which they were provided information about mouse allergies and demonstrations of methods to reduce mouse infestation and allergen exposure at home.

Those in the education only group were also offered complimentary professional IPM along with cleaning, air purifiers, and allergen-proof mattress and pillow encasements after the study’s completion. At the six- and 12-month marks of the study, 11 percent and 8 percent of the education only group, respectively, reported seeking out professional exterminator services on their own.

The research team assessed each child in the clinic at six and 12 months, and via telephone calls at three and nine months.

Children were assessed for asthma symptoms — including but not limited to cough without a cold, inability to speak full sentences due to asthma and disrupted sleep — asthma-related health care use (acute care visits, emergency room visits or hospitalizations in three months prior to each assessment), asthma medication use and maximal symptoms days, defined as the highest number of days that the child had three different types of asthma symptoms in the two weeks prior to the visit or phone call.

Median mouse-specific IgE levels — an immune system allergy marker — were 13 and 10 kilounits per liter in the IPM plus education and education only groups, respectively.

“The remarkable thing we saw was a large reduction in mouse allergen levels for both groups, which hasn’t been observed in other clinical trials we are aware of,” notes Matsui, who practices at the Johns Hopkins Children’s Center. Some 46 percent and 41 percent of IPM plus education and education only groups, respectively, had bedroom floor mouse allergen reductions of at least 90 percent at some point during the study.

The large reductions in allergens correlated with substantial improvements in asthma, says Matsui. For every 50 percent decrease in bedroom floor mouse allergen levels, there were decreases in how often children had asthma symptoms, used medications, and had an acute or Emergency Department visit for asthma. According to the team’s estimations, a 90 percent decrease in bedroom floor mouse allergens would be expected to reduce maximum symptoms days by 14.1, acute visits by 0.82 visits and Emergency Department visits by 0.42, per person, per year.

“Future studies need to systematically determine whether the effects of education alone are better than doing nothing at all with regards to reducing both mouse allergen exposure and asthma symptoms. However, these results suggest that we don’t need to wait for such future studies to provide do-it-yourself instructions to children and communities affected by mouse allergy-associated asthma right now,” Matsui says. “From a practical standpoint, providing education is an inexpensive, relatively uncomplicated and resource-light thing to do.”