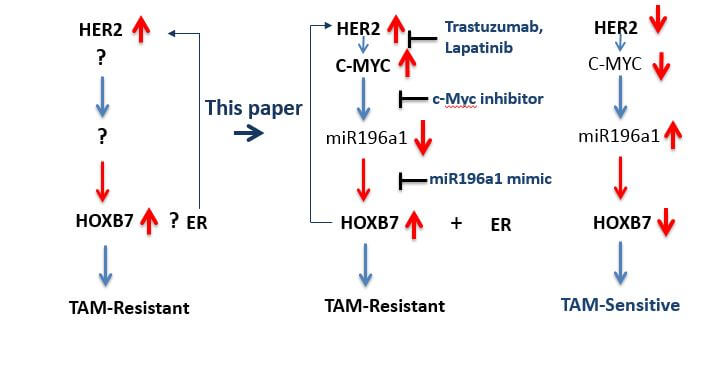 For reasons unknown, many patients with breast cancer treated with the estrogen receptor-blocking drug tamoxifen eventually become resistant to the treatment despite the fact that their cancer cells still have the estrogen receptor proteins that the drug normally targets. Now, Johns Hopkins Kimmel Cancer Center scientists and their colleagues have traced out an intricate molecular pathway in those cells they say may explain, at least in part, how tamoxifen resistance develops.

Results of the study, using laboratory-grown human breast cancer cells, are summarized online July 15 in the journal Cancer Discovery. If further research affirms and extends the findings, the investigators say, their discovery could lead to new treatments that prevent resistance in patients whose breast tumors are fueled by the naturally produced hormone, estrogen.

In people with so-called estrogen receptor (ER) positive breast cancers, tamoxifen blocks the receptors in the tumor cells from binding to estrogen and thereby activating other cancer-promoting molecules in cancer cells. In the new study, Kimmel Cancer Center researcher Saraswati Sukumar, Ph.D. and her colleagues found that the protein HOXB7 participates in a “feedback loop” of cellular activities that helps estrogen receptors elude the effects of tamoxifen.

Specifically, the research team analyzed 15 human breast cancer cell lines and found that the partnership between HOXB7 and estrogen receptors helps to produce more of a protein called MYC in these cells. Too much MYC in cancer cells, Sukumar says, can repress the actions of a small molecule called microRNA 196a that would normally put the brakes on the production of HOXB7.

Overall, the scientists showed that the HOXB7 protein associates with estrogen receptors in tamoxifen-resistant cells and helps activate ER-targeted genes, including HER2. Breast cancers that have more HER2 protein tend to be aggressive and fast-growing cancers, although treatment of these cancers with the drug Herceptin (trastuzumab) has improved the survival of women with early-stage breast cancer by 30 percent in recent years. The HER2 protein in tamoxifen resistant cells stabilizes MYC, allowing it to continue its cancer-related functions over longer periods of time.

The molecular feedback loop connecting MYC, HOXB7, ER and HER2 potentially offers many different targets to treat tamoxifen-resistant cancers, says Sukumar, but developing ways to interfere with MYC might be the most useful strategy at the moment.

“Targeting MYC seems a potentially powerful way to get at HOXB7, and because HOXB7 controls so many pathways, you’d be able to collapse a large number of pathways involved in breast cancer in one fell swoop,” explains Sukumar, a professor of oncology and pathology at the Johns Hopkins University School of Medicine.

The research team tested this idea by depleting MYC levels in tamoxifen-resistant cells using a chemical to “silence” the MYC gene. That silencing enabled the cells to respond to tamoxifen again, Sukumar says. Sukumar and colleagues also tested two experimental small-molecule inhibitors of MYC in breast cancer cell lines and found that the inhibitors reduced the levels of HOXB7 and HER2. The researchers were also able to significantly shrink implanted tumors in mice using a combination of one of the inhibitors and Herceptin.

Because “a large number of women on tamoxifen eventually become resistant, these results suggest that it might be better to start using MYC inhibitors right from the start, to prevent tamoxifen resistance from happening altogether,” Sukumar suggests. “By doing that, it’s possible that we could eradicate all the cancer cells and significantly reduce the chances of recurrence due to tamoxifen resistance.”

Sukumar says that currently, there are no clinical trials using any MYC-targeting drugs or combination of drugs to interfere with the molecular feedback loop.

In addition to Sukumar, much of the research was performed by Kideok Jin. Other scientists contributing to it include Sunju Park, Wei Wen Teo, Preethi Korangath, Sean Soonweng Cho, Takahiro Yoshida and Leigh-Ann Cruz of the Kimmel Cancer Center; Balázs Gyorffy of Semmelweis University in Budapest, Hungary; Chirayu Pankaj Goswami and Harikrishna Nakshatri of Indiana University; Weiqiang Zhou and Hongkai Ji of the Johns Hopkins Bloomberg School of Public Health; Ying Su, Muhammad Ekram, and Kornelia Polyak of Dana-Farber Cancer Institute; and Zhengsheng Wu and Tao Zhu of the University of Science and Technology of China.