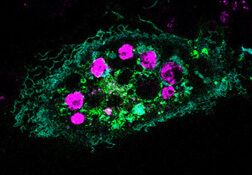 A team of researchers has devised a Pac-Man-style power pellet that gets normally mild-mannered cells to gobble up their undesirable neighbors. The development may point the way to therapies that enlist patients’ own cells to better fend off infection and even cancer, the researchers say.

A description of the work will be published July 15 in the journal Science Signaling.

“Our goal is to build artificial cells programmed to eat up dangerous junk in the body, which could be anything from bacteria to the amyloid-beta plaques that cause Alzheimer’s to the body’s own rogue cancer cells,” says Takanari Inoue, Ph.D., an associate professor of cell biology in the Johns Hopkins University School of Medicine’s Institute for Basic Biomedical Sciences, who led the study. “By figuring out how to get normally inert cells to recognize and engulf dying cells, we’ve taken an important step in that direction.”

Identifying and devouring dying cells and other “junk” is usually the job of white blood cells called macrophages and neutrophils, which also go after bacteria and other invaders in a process called phagocytosis. For the new experiments, Inoue teamed up with researchers at the University of Tokyo to strip down phagocytosis, figuring out the minimum tools one cell needs to eat another one.

They started not with macrophages, but with a type of laboratory-grown human cells known as HeLa, which normally can’t perform phagocytosis. Their first task was to induce the HeLa cells to attach to nearby dying cells by getting the right “receptors” to the HeLa cells’ surface. The researchers knew that part of a receptor protein called MFG-E8 would recognize and stick to a distress signal on the surface of dying cells, and coaxing the HeLa cells to make the protein fragment was straightforward. To get the fragment, termed C2, onto the outside of the cells, the team found a way to stick it to another protein that was bound for the cell’s surface, thus taking advantage of the cell’s own transportation system. “We put C2 on the same bus as the membrane protein,” Inoue says.

As a result, up to six dying cells stuck to each HeLa cell. The bad news was that though they were cozy, the HeLa cells weren’t actually eating the dying cells.

Fortunately, Inoue says, the team already had an idea about what to try next: Other research had shown that activating a gene called Rac would cause a cell to engulf beads stuck to its surface. Sure enough, HeLa cells with both surface C2 and activated Rac swallowed dying cells readily, the team found.

“We’ve shown it’s possible to endow ordinary cells with the power to do something unique: take on the role of a specialized macrophage,” Inoue says.

Inoue cautions that the investigators don’t believe the engulfed cells are being broken down. Getting the HeLa cells to finish the phagocytosis process will be one of the group’s next steps.

Other authors on the paper are Hiroki Onuma, Toru Komatsu, Makoto Arita, Kenjiro Hanaoka, Tasuku Ueno, Takuya Terai and Tetsuo Nagano of the University of Tokyo.

We are providing this photo/video with the understanding that it will be used only to help illustrate the story in the corresponding news release. Please also find appropriate credit information in the press release. If there is anything else you need, please email us at JHMedia@jhmi.edu. Thank you.