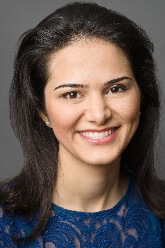 The fellowships are awarded annually to graduate students who are immigrants or children of immigrants in the United States. The recipients are seen as poised to make significant contributions to U.S. society, culture or their academic fields. Fellows receive up to $90,000 in educational support over two years, and they join a lifelong community of New American Fellows.

“I admire the fellows’ ambition, accomplishments and work ethic,” says Daisy Soros, who co-founded the fellowship program in 1997 with her late husband, Paul Soros. “They underscore the importance of new Americans to this country.” Soros and her husband both immigrated to the United States from Hungary.

Soleimanifard was born in Iran during the Gulf War, in the aftermath of a revolution that left her country in a decades-long battle between sociopolitical groups. Growing up in a society with rigid gender roles, Soleimanifard developed a determination to live a purposeful life and make a lasting impact.

She graduated from Sharif University, the top engineering school in Iran, where she became interested in biomedical imaging.

Soleimanifard moved to the United States at the age of 23 and started her graduate education at The Johns Hopkins University. She forged collaborations with mentors in engineering, radiology and cardiology, and developed a noninvasive MRI methodology that offers biological insights into early coronary artery disease. She was named a Siebel Scholar and received funding from the American Heart Association to validate her techniques on patients with heart disease. In addition, she has served on the board of several student organizations.

After receiving her Ph.D., she started her medical education at the Johns Hopkins University School of Medicine. Her goal is to build upon the technical dexterity that she acquired at engineering school with medical training to clinically care for patients and to develop noninvasive tools for early disease diagnosis.

Soleimanifard became a permanent resident of the United States in 2013 through the National Interest Waiver program.

She is immensely grateful to have been chosen for a Soros award. “The Paul and Daisy Soros Fellowship enables me to develop a can-do attitude and to follow my passion, but most important, it reminds me of my responsibilities as a new American,” she says.