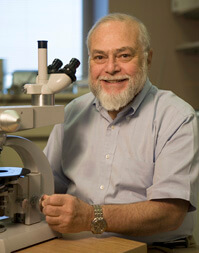 Mark E. Molliver, M.D., a professor emeritus of neuroscience and neurology in the Johns Hopkins University School of Medicine whose discoveries had a significant impact on analyzing the structure of the brain and its response to drugs; and whose skills as an influential teacher became legendary over a nearly half-century career, died on May 10 at The Johns Hopkins Hospital of complications following cardiac arrest. He was 75.

“Mark was one of the country’s greatest neuroanatomists,” said Solomon Snyder, founder and long-time director of what now is known as Hopkins’ Solomon H. Snyder Department of Neuroscience.   Snyder, himself the discoverer of the brain’s opiate receptors, said Molliver “made major discoveries about the role of serotonin,” the molecule in the brain most closely associated with feelings of well-being and happiness.

Among his other research findings were the discovery of the adverse impact on the brain of the obesity drug fen-phen, which was among the factors prompting the federal Food and Drug Administration to ban it in 1997. His research also produced important findings about the drug MDMA, commonly known as “ecstasy.”  His research showed that both fen-phen and ecstasy cause brain nerves (neurons) to die, leading to a reduction in serotonin levels.

As a teacher, Molliver was much-admired and appreciated, receiving teaching awards practically every year from 1974 to 1991. “For years and years he also was the premier teacher of neuroanatomy for our medical students,” Snyder said.

Among Molliver’s protégés were John Morrison, Ph.D., now dean of basic sciences and the graduate school of biological sciences at Mt. Sinai School of Medicine in New York, and Barry Kosofsky, M.D., Ph.D., now chief of the Division of Pediatric Neurology at NewYork-Presbyterian Hospital/Weill Cornell Medical Center and the director of the Horace W. Goldsmith Foundation Laboratory of Molecular and Developmental Neuroscience. He is also a professor of pediatrics and neurology and neuroscience at Weill Cornell Medical College.

“Mark was one of our very best teachers, extraordinarily gifted and clear,” said Hopkins neuroscientist David Linden, Ph.D., another former colleague of Molliver.

“What really stood out about Mark was his extreme collegiality and warmth, a gentle manner with everyone.  He was scientifically critical when called for but a real mensch and always willing to help people,” Linden said.

As a scientist, Molliver was “extremely careful and very creative” in exploring how the brain’s structure and functions affect a person’s psychology and reaction to outside influences and substances, such as narcotics and other drugs.

“He always had the interest of seeing the forest and the trees.  He wasn’t only focused on micro minutia,” Linden said.

Born in Boston, Molliver received his undergraduate degree from Harvard in 1958 and his medical degree there in 1963.  Following his internship and residency at Massachusetts General Hospital in Boston and research fellowships in neurophysiology at the Karolinska Institute in Stockholm, plus other predoctoral studies at Harvard and Yale and two years of military duty at U.S. Public Health Services hospitals in Bethesda and Baltimore, he came to Hopkins in 1965 as a postdoctoral fellow in neuroanatomy. He later held a second Hopkins postdoctoral fellowship in neurophysiology under Vernon Mountcastle, M.D., often called the “father of neuroscience” for his discovery of the columnar structure of the brain’s cells.

In 1969, Molliver became one of the first residents in Hopkins’ then-just created Department of Neurology and joined the faculty as an assistant professor of anatomy and neurology in 1971, then rising through the academic ranks until he held full professorships in neuroscience and neurology.  Although he retired in 2006, he continued to come to work and attend departmental faculty meetings.

“Mark was tenacious and still passionate about research,” says Richard Huganir, director of the neuroscience department. “He still was collaborating with other faculty members and coming to meetings until two weeks before his death.”

Plans for a memorial service are not yet complete.  Molliver is survived by his longtime partner, Elizabeth O’Hearn, M.D., a 1985 graduate of the Hopkins School of Medicine, an assistant professor of neurology and neuroscience from 1997 to 2009, and a collaborator with him on 15 research publications; three children, Karin, a musician and family therapist; Derek, a neuroscientist at the University of Pittsburgh who collaborated with his father on several scientific papers; and Erica, a graduate in rural health from Hopkins’ Bloomberg School of Public Health.  Survivors also include three grandchildren — one of whom was born in Hopkins Hospital three floors above where Molliver was being treated; and his former wife, Saralynn Clark.