Many Skin Cancer Patients Still Too Likely to Sunburn 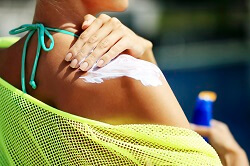 A recent study by researchers at Johns Hopkins concludes that a substantial number of people with a history of the most frequent kind of nonmelanoma skin cancers still get sunburned at the same rate as those without previous history, probably because they are not using sun-protective methods the right way or  in the right amounts.


The findings, which were based on self-reporting of sunburn and sun protection practices gathered from the National Health Interview Survey, urge skin doctors and other health care providers to better educate their patients about protective skin care practices, especially for those with history of nonmelanoma skin cancer.

The findings were published in May ahead of print in the Journal of the American Academy of Dermatology.

“It is important to look at how patients are currently practicing sun protection and what they are doing that is not very effective,” says Anna Chien, M.D., co-director of the Cutaneous Translational Research Program in the Department of Dermatology at the Johns Hopkins University School of Medicine. “Only then can we make strides in helping patients improve their sun protective practices by ensuring they do them the correct way.” Sun exposure is the leading cause of nonmelanoma skin cancers, and treatment is estimated to cost $4.8 billion in the U.S. annually.

In the United States, Chien says, approximately 13 million white non-Hispanic individuals have a history of at least one type of nonmelanoma skin cancer, including basal cell and squamous cell cancers, putting them at a well-documented higher risk for subsequent nonmelanoma skin cancer. For example, studies show that 40 percent of those with a history of basal cell carcinoma are diagnosed with another lesion within five years.

Most importantly, the researchers say, was the finding that although people with previous nonmelanoma skin cancer tend to use one or all of the protective practices, there was not a significant difference in reporting of sunburn compared to those without a history — 29.7 percent versus 40.7 percent. This means, Chien says, that although those with a history of skin cancer are proactively using protective methods, they may not be doing so effectively, especially among younger patients. Approximately two-thirds (66.9 percent) of individuals ages 18 to 39 reported sunburn.

Chien says that while sunscreen was the most common use of sun protection reported by participants, it was not associated with lower rates of sunburn in those with previous nonmelanoma skin cancer. While noting that self-reports, such as those on which the study is based, are not entirely reliable, the disconnect among those who use sunscreen and still get burned may occur because individuals are not applying sunscreen effectively. Explaining the correct ways — such as how much and how often — to apply sunscreen to patients is key, says Chien.

“These results suggest that physicians need to go the extra step in educating patients on the most optimal way of utilizing sun protection methods. Public health messages should also emphasize not only sun protection but how to do it correctly,” Chien says.

The researchers caution that although the data were pulled from a national survey, the results are self-reported and therefore may have some bias. In addition, Chien says, nonmelanoma skin cancer tends to be considered less important than melanoma and is thus underreported.

“The bottom line is that people should be using multiple forms of skin protective practices,” says Chien. “That means incorporating shade or sun avoidance into a daily routine, or wearing a wide-brimmed hat while also applying sunscreen correctly.”