Making Memories: How One Protein Does It 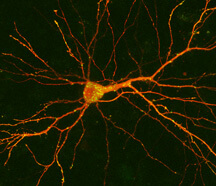 Studying tiny bits of genetic material that control protein formation in the brain, Johns Hopkins scientists say they have new clues to how memories are made and how drugs might someday be used to stop disruptions in the process that lead to mental illness and brain wasting diseases.

In a report published in the March 2 issue of Cell, the researchers said certain microRNAs—genetic elements that control which proteins get made in cells— are the key to controlling the actions of so-called brain-derived neurotrophic factor (BDNF), long linked to brain cell survival, normal learning and memory boosting.

During the learning process, cells in the brain’s hippocampus release BDNF, a growth-factor protein that ramps up production of other proteins involved in establishing memories. Yet, by mechanisms that were never understood, BDNF is known to increase production of less than 4 percent of the different proteins in a brain cell.

That led Mollie Meffert, M.D., Ph.D., associate professor of biological chemistry and neuroscience at the Johns Hopkins University School of Medicine to track down how BDNF specifically determines which proteins to turn on, and to uncover the role of regulatory microRNAs.

MicroRNAs are small molecules that bind to and block messages that act as protein blueprints from being translated into proteins. Many microRNAs in a cell shut down protein production, and, conversely, the loss of certain microRNAs can cause higher production of specific proteins.

“This short genetic sequence has been shown by other researchers to behave like a bar code that can selectively prevent production of Let-7 microRNAs,” says Meffert.

To test if the loss of Let-7 microRNAs lets BDNF increase production of specific proteins, Meffert’s team genetically engineered neurons so they could no longer decrease Let-7 microRNAs. They found that treating these neurons with BDNF no longer resulted in decreased microRNA levels or an increase in learning and memory proteins.

In measuring microRNA levels in cells treated with BDNF, the researchers also found more than 174 microRNAs that increased with BDNF treatment. This suggested to the research team that BNDF treatment also can increase other microRNAs and, thereby, decrease production of certain proteins. Says Meffert, some of these proteins may need to be decreased during learning and memory, whereas others may not contribute to the process at all.

To confirm that BDNF, via microRNA action, halts the production of certain proteins, the researchers monitored living brain cells to find out where messages go in response to BDNF. Messages that aren’t translated into proteins can accumulate inside small formations within cells. Using a microscope, the researchers watched a lab dish containing brain cells that had been marked with a fluorescent molecule that labels these formations as glowing spots. Treating cells with BDNF caused the number and size of the glowing spots to increase. The researchers determined that BDNF uses microRNA to send messages to these spots where they can be exiled away from the translating machinery that turns them into protein.

“Monitoring these fluorescent complexes gave us a window that we needed to understand how BDNF is able to target the production of only certain proteins that help neurons to grow and make learning possible,” Meffert says.


Adds Meffert, “Now that we know how BDNF boosts production of learning and memory proteins, we have an opportunity to explore whether therapeutics can be designed to enhance this mechanism for treatment of patients with mental disorders and  neurodegenerative diseases like Alzheimer’s disease.”

This research was supported by funds from the Braude Foundation and the Brain Science Institute of Johns Hopkins.

Related Stories:
Reducing memory to a molecule: A researcher explores the molecular essence of memory

Mollie Meffert on memory and NF-kappaB