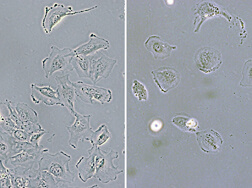 Researchers at Johns Hopkins have identified a gene that, when repressed in tumor cells, puts a halt to cell growth and a range of processes needed for tumors to enlarge and spread to distant sites. The researchers hope that this so-called “master regulator” gene may be the key to developing a new treatment for tumors resistant to current drugs.

“This master regulator is normally turned off in adult cells, but it is very active during embryonic development and in all highly aggressive tumors studied to date,” says Linda Resar, M.D., an associate professor of medicine, oncology and pediatrics, and affiliate in the Institute for Cell Engineering at the Johns Hopkins University School of Medicine. “Our work shows for the first time that switching this gene off in aggressive cancer cells dramatically changes their appearance and behavior.” A description of the experiments appears in the May 2 issue of the journal PLOS ONE.

Resar has been investigating genes in the master regulator’s family, known as high mobility group or HMG genes, for two decades. In addition to their role in cancer, these genes are essential for giving stem cells their special powers, and that’s no coincidence, she says. “Many investigators consider cancer cells to be the evil twin of stem cells, because like stem cells, cancer cells must acquire special properties to enable the tumor to grow and metastasize or spread to different sites,” she explains.

In a previous study, she and her team devised techniques to block the HMGA1 gene in stem cells in order to study its role in those cells. In their prior work, they discovered that HMGA1 is essential for reprogramming adult cells, like blood or skin cells, into stem cells that share most, if not all, properties of embryonic stem cells.

“The aggressive breast cancer cells grow rapidly and normally appear spindle-shaped or thin and elongated. Remarkably, within a few days of blocking HMGA1 expression, they appeared rounder and much more like normal breast cells growing in culture,” says Resar. The team also found that the cells with suppressed HMGA1 grow very slowly and fail to migrate or invade new territory like their HMGA1-expressing cousins.

The team next implanted tumor cells into mice to see how the cells would behave. The tumors with HMGA1 grew and spread to other areas, such as the lungs, while those with blocked HMGA1 did not grow well in the breast tissue or spread to distant sites.

“From previous work, we know that HMGA1 turns on many different genes needed during very early development, but it’s normally turned off by the time we’re born,” says postdoctoral fellow Sandeep Shah, Ph.D., who led the study. “Flipping that master regulator back on seems to be necessary for a cancer to become highly aggressive, and now we’ve seen that flipping HMGA1 off again can reverse that aggressive behavior.”

The next step, Resar says, is to try to develop a therapy based on that principle. The team is working with other researchers at Johns Hopkins to see whether HMGA1-blocking molecules could be delivered to tumors inside nanoparticles. Another possible approach, she says, would be to block not HMGA1 itself, but one of the pathways or processes that it affects.

Link to the Plos One paper