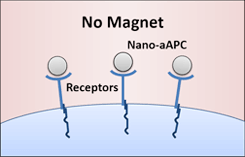 Using tiny particles designed to target cancer-fighting immune cells, Johns Hopkins researchers have trained the immune systems of mice to fight melanoma, a deadly skin cancer. The experiments, described on the website of ACS Nano on February 24, represent a significant step toward using nanoparticles and magnetism to treat a variety of conditions, the researchers say.

"Size was key to this experiment," says Jonathan Schneck, M.D., Ph.D., a professor of pathology, medicine and oncology at the Johns Hopkins University School of Medicine's Institute for Cell Engineering. "By using small enough particles, we could, for the first time, see a key difference in cancer-fighting cells, and we harnessed that knowledge to enhance the immune attack on cancer."

Schneck's team has pioneered the development of artificial white blood cells, so-called artificial antigen-presenting cells (aAPCs), which show promise in training animals' immune systems to fight diseases such as cancer. To do that, the aAPCs must interact with immune cells known as naive T cells that are already present in the body, awaiting instructions about which specific invader they will battle. The aAPCs bind to specialized receptors on the T cells' surfaces and "present" them with distinctive proteins called antigens. This process activates the T cells, programming them to battle a specific threat such as a virus, bacteria or tumor, as well as to make more T cells.

The team had been working with microscale particles, which are about one-hundredth of a millimeter across. But, says Schneck, aAPCs of that size are still too large to get into some areas of a body and may even cause tissue damage because of their relatively large size. In addition, the microscale particles bound equally well to naive T cells and others, so the team began to explore using much smaller nanoscale aAPCs. Since size and shape are central to how aAPCs interact with T cells, Karlo Perica, a graduate student in Schneck's laboratory, tested the impact of these smaller particles.

The so-called nano-aAPCs were small enough that many of them could bind to a single T cell, as the team had expected. But when Perica compared naive T cells to those that had been activated, he found that the naive cells were able to bind more nanoparticles. "This was quite surprising, since many studies had already shown that naive and activated T cells had equal numbers of receptors," Schneck says. "Based on Karlo's results, we suspected that the activated cells' receptors were configured in a way that limited the number of nanoparticles that could bind to them."

To see whether there indeed was a relationship between activation and receptor clustering, Perica applied a magnetic field to the cells, causing the nano-aAPCs to attract one another and cluster together, bringing the receptors with them. The clustering did indeed activate the naive T cells, and it made the activated cells even more active - effectively ramping up the normal immune response.

To examine how the increased activation would play out in living animals, the team treated a sample of T cells with nano-aAPCs targeting those T cells programmed to battle melanoma. The researchers next put the treated cells under a magnetic field and then put them into mice with skin tumors. The tumors in mice treated with both nano-aAPCs and magnetism stopped growing, and by the end of the experiment, they were about 10 times smaller than those of untreated mice, the researchers found. In addition, they report, six of the eight magnetism-treated mice survived for more than four weeks showing no signs of tumor growth, compared to zero of the untreated mice.

In addition to its potential medical applications, Perica notes that combining nanoparticles and magnetism may give researchers a new window into fundamental biological processes. "In my field, immunology, a major puzzle is how T cells pick out the antigen they're targeting in a sea of similar antigens in order to find and destroy a specific threat," he says. "Receptors are key to that action, and the nano-aAPCs let us detect what the receptors are doing."

"We have a bevy of new questions to work on now: What's the optimal magnetic 'dose'? Could we use magnetic fields to activate T cells without taking them out of the body? And could magnets be used to target an immune response to a particular part of the body, such as a tumor's location?" Schneck adds. "We're excited to see where this new avenue of research takes us."

Other authors on the report are Ang Tu, Joan Bieler and Michael Edidin of the Johns Hopkins University School of Medicine, and Anne Richter of Miltenyi Biotec.

Under a licensing agreement between NexImmune and the Johns Hopkins University, Jonathan Schneck is entitled to a share of royalty received by the University on sales of products described in this publication. Schneck also owns NexImmune stock, which is subject to certain restrictions under University policy. He is also a member of the company's Board of Directors and Scientific Advisory Board. The terms of this arrangement are being managed by the Johns Hopkins University in accordance with its conflict of interest policies.