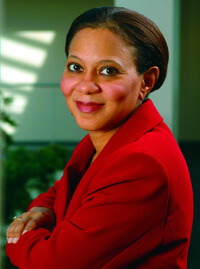 Lisa Cooper, M.D., M.P.H., a Liberian-born Johns Hopkins internist and epidemiologist who conducts landmark studies designed to understand and overcome racial and ethnic disparities in medical care and research, has been named a 2007 fellow by the John D. and Catherine T. MacArthur Foundation.  The fellowship comes with a $500,000 “genius grant” that Cooper may use in any way she chooses.

The 44-year old Cooper, who has been on The Johns Hopkins University School of Medicine faculty since 1994, rose through the academic ranks and was promoted to full professor in the Division of General Internal Medicine this year. She also holds a joint appointment in epidemiology and health policy at the university’s Bloomberg School of Public Health and a joint appointment in the School of Nursing.

The MacArthur Foundation says each year’s fellows are selected on the basis of exceptional creativity, promise for important future advances based on a track record of significant accomplishment, and potential for the fellowship to facilitate subsequent creative work.

“Dr. Cooper is a distinguished member of our faculty and her body of work is absolutely critical to the mission of delivering the benefits and advances in health care to all who need them,” said Edward D. Miller, dean and CEO of Johns Hopkins Medicine. “Johns Hopkins is proud and fortunate to have her leadership and vision, and we thank the MacArthur foundation for its recognition of her enormous talent.”

“Needed health care reform can only succeed if barriers to care are ended and the medical profession tailors prevention, diagnosis and treatment to individual’s risks,” said William R. Brody, president of The Johns Hopkins University. “The MacArthur foundation, with the award to Dr. Cooper, is honoring both her and the principles driving her much-needed perspective.”

Cooper, who lives in Columbia, Md., with her husband and son, says she was “completely shocked, overwhelmed and honored” at the news, which she said arrived by telephone call a week before the public announcement today.  She praises Johns Hopkins for “giving me an exemplary professional home” and colleagues, mentors and trainees “who have brought so much support to my efforts.

“I grew up around people from a lot of different backgrounds,” she says.  “Throughout my career, I’ve strived to understand how patients and physicians from different racial, ethnic and social backgrounds can learn to relate and work with each other to achieve better care.”

Thus far, Cooper’s work has focused exclusively on doctor and patient relationships in the United States.  When asked what she plans to do with the $500,000, she answered that she hopes to extend her focus to individuals in economically or socially disadvantaged communities throughout the world.

At Hopkins, Cooper’s research has sought to better define barriers to equitable care across ethnic groups and identify ways for medical science to address a growing awareness of racial and ethnic disparities in disease prevalence, disease risk and care delivery.

Although MacArthur nominees’ past achievements are a factor in their selection, the fellowship is not considered a reward for past deeds but rather an investment in a person's originality, insight and potential, the foundation says.  The $500,000 grant comes without stipulations or reporting requirements, offering the opportunity for fellows to accelerate their current activities or take their work in new directions.

Cooper was born in Monrovia, Liberia (capital city), where her father was a surgeon and her mother was a research librarian. She has two siblings: a brother who is a psychiatrist and a sister who is a film-maker. She attended high school in Switzerland and moved to the United States to attend college in 1980. Cooper earned a bachelor’s degree in chemistry from Emory University and her medical degree from the University of North Carolina at Chapel Hill. She completed internship and residency training in internal medicine at University of Maryland Hospital and completed a research fellowship in general internal medicine and a master’s degree in public health at Johns Hopkins in 1993, joining Johns Hopkins University School of Medicine in the Department of Medicine as an instructor in 1994.

One of the first studies she published showed that the major differences between patients with depression in primary care and those in mental health settings were demographic rather clinical, offering evidence to support the idea that cultural and social factors strongly influence whether and where people seek help for mental illness.

She followed that with a series of studies about patients’ attitudes and preferences regarding mental illness, including one showing that for African Americans, spirituality is an important aspect of care for depression and another showing that fears of addiction to antidepressant medication are more common among ethnic minorities than whites.

As she rose through the professorial ranks, she and her colleagues broadened their interests in describing barriers that contribute to overall disparities in health care. In one study, for example, they found that African-American patients talked less and asked fewer questions of their doctors than did white patients. In another study, they found that blacks were less likely to trust their physicians and more likely to be concerned about personal privacy and the potential for harmful experimentation in hospitals than were whites.

Cooper is currently the lead researcher of two randomized controlled trials.  One of these trials explores whether teaching communication skills to doctors and patients with hypertension affects patient adherence to recommended treatments. The other trial is investigating the effects of teaching doctors and care managers to deliver culturally tailored and patient-centered care to African-American patients with depression.

“The best physicians are going to be those who understand the purpose and the substance of Lisa Cooper’s scholarship and her extraordinary understanding of clinical care,” said Myron E. Weisfeldt, M.D., chairman of the Department of Medicine at Johns Hopkins, and physician in chief of The Johns Hopkins Hospital.  “There’s no question that her work will inspire generations to come of doctors and doctors-in-training.