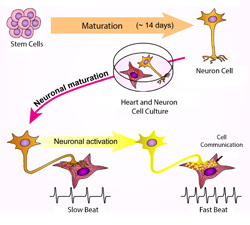 An illustration of this study. Human stem cells were turned into sympathetic neurons, which were then grown together with heart muscle cells. The neurons connected to the heart cells, which caused the neurons to mature further. When the neurons were stimulated, they released molecular signals and the heart cells beat faster.
Courtesy of Cell Press

Researchers at Johns Hopkins report that a type of lab-grown human nerve cells can partner with heart muscle cells to stimulate contractions. Because the heart-thumping nerve cells were derived from induced pluripotent stem (iPS) cells that in turn were made from human skin cells, the researchers believe the cells — known as sympathetic nerve cells — will be an aid in studying disorders that affect the nervous system — that is, scientists will be able to grow nerve cells in the lab that replicate particular patients’ diseases.
Gabsang Lee, Ph.D., D.V.M., who led the study, says his experiments were inspired in part by the fact that many promising drugs fail in clinical trials because of nervous system side effects, including increased blood pressure. “Our work advances the possibility that we might one day be better able to predict which drugs will negatively affect the functioning of our vital organs by simply testing them on lab-grown cells,” he adds.
A summary of the findings will appear online June 16 in the journal Cell Stem Cell.
Sympathetic nerve cells are part of the so-called sympathetic nervous system that more or less automatically activates and regulates breathing, heart rate, visual focus, digestion and fear response. The cells connect the brain to the eyes, blood vessels and most internal organs, and are rarely influenced by conscious thought.
When these cells are activated, they prompt the release of signaling molecules like norepinephrine, which do things like dilate the pupils and the lungs’ airways, constrict blood vessels to raise blood pressure, and increase the heartbeat’s frequency and force. Malfunctioning sympathetic nerve cells can contribute to many disorders, including high blood pressure and other cardiac conditions.
For their experiments, Lee’s research group started with both human embryonic stem cells and iPS cells, then genetically engineered them to glow green if certain master genes were activated, a simple visual sign the cells were becoming sympathetic nerve cells.
Trying multiple combinations of chemicals, the team eventually found a recipe that took the stem cells through different phases of maturation, similar to what happens during embryonic development, to become sympathetic nerve cells. They compared the proteins the cells made and the electrical currents they generated to the known patterns of sympathetic and other nerve cells, and report they were indeed consistent with what’s found in ordinary sympathetic nerve cells.
To find out if the lab-grown nerve cells could correctly pair with target cells and direct their functioning, the researchers grew them together with heart muscle cells from three different sources: newborn mice, mouse embryonic stem cells and human iPS cells. The nerve cells connected with muscle cells from all three sources, although when the team added nicotine to stimulate the nerve cells, only the muscle cells from newborn mice responded by beating faster. That result needs further study, Lee says, but could be because some of the muscle cells were too immature.
Caption: Sympathetic neurons, genetically modified to become activated by blue light, can increase the beating of heart cells when grown together.
Credit: Courtesy of Cell Press
On the plus side, Lee says, because previous research showed that working connections between nerve cells and their target tissues can help nerve cells mature during development, the team examined nerve cells grown with and without heart muscle cells. As predicted, sympathetic nerves grown with heart muscle cells appeared more mature, based on the proteins they released, than their segregated counterparts.
“The key question in the stem cell field is, how can we make mature cells of every kind in the body?” says Lee. “Now we can check sympathetic nerve cells off the list, although we will keep studying their maturation process to figure out what molecular changes are caused by their connection to heart cells.”
His team will also test the nerves’ ability to pair with other target tissues, like blood vessels and brown fat, which are controlled by the sympathetic nervous system and involved in disorders like high blood pressure, diabetes and obesity. (Brown fat helps control calorie consumption and body temperature.) Lee says target tissue pairing can be combined with studying nerve cells made from patients with those diseases to learn how the genetic errors of different patients influence the functioning of the nerves.
Other authors of the report include Yohan Oh, Gun-Sik Cho, Zhe Li, Ingie Hong, Renjun Zhu, Min-Jeong Kim, Yong Jun Kim, Emmanouil Tampakakis, Leslie Tung, Richard Huganir, Xinzhong Dong and Chulan Kwon of the Johns Hopkins University School of Medicine.
This work was supported by grants from the Robertson Investigator Award from New York Stem Cell Foundation, the Maryland Stem Cell Research Fund (MSCRF/TEDCO) and the Adrienne Helis Malvin Medical Research Foundation.