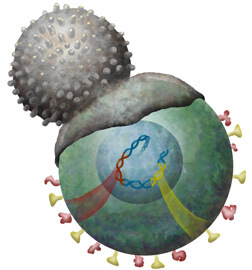 Researchers have identified a protein that causes loss of function in immune cells combating HIV. The scientists report in a paper appearing online Dec. 2 in the Journal of Clinical Investigation that the protein, Sprouty-2, is a promising target for future HIV drug development, since disabling it could help restore the cells’ ability to combat the virus that causes AIDS.

“A large part of the reason we lose wars against viruses that cause chronic infection is that immune cells called T cells get turned off,” says Jonathan Schneck, M.D., Ph.D., a professor of pathology in the Johns Hopkins Institute for Cell Engineering, who led the study. “We’ve been trying for some time to find out why that is, and in our study we were able to identify a family of proteins called Sprouty, specifically Sprouty-2, as a culprit.”

T cells, a type of white blood cell, are programmed to recognize and kill cells infected with a specific virus or other disease-causing agent. Doing so effectively requires a T cell to perform multiple functions — par for the course when the cells are fighting a fresh infection. But when infection drags on, as HIV does, T cells often become “exhausted,” losing two or more functions, except among so-called “elite suppressors” — rare HIV-infected patients whose T cells never seem to tire.

To investigate the source of exhaustion, the Johns Hopkins team first sought a way to recreate that phenomenon in the laboratory. Yen-Ling Chiu, M.D., a graduate student in Schneck’s laboratory, was able to simulate the effects of long-term chronic infection by growing influenza-fighting T cells and dosing them with large amounts of antigen, a type of molecule that, like a red flag waved at a bull, signals immune cells to attack. Doing this “made the T cells dysfunctional — they looked like exhausted T cells in HIV,” Chiu says.

Chiu next looked for differences in proteins made in the dysfunctional cells compared to those in fresh T cells. It turned out, he says, that many of the proteins whose quantities were different between the two groups of cells were involved in a biochemical chain of events called the MAPK/ERK pathway. That pathway controls a variety of important processes, such as cell division. One of the proteins that was more abundant in the exhausted T cells than in the fresh T cells was Sprouty-2, which, other studies had shown, slows down the MAPK/ERK pathway. Suspecting that Sprouty-2 could be the culprit in T cell exhaustion, Chiu used a specially engineered virus to disable the Sprouty-2 gene in some T cells and found that they were more likely to retain all of their functions than were the cells with working Sprouty-2.

“It was a surprise to find T cell exhaustion controlled by such a central pathway, and especially that it worked in such a highly fine-tuned way, keeping some T cell functions going but not others,” says Schneck.

Though the finding was intriguing, Schneck says, “the real test was whether it held up in blood samples from HIV patients.” In one experiment, reducing the amount of Sprouty-2 in exhausted HIV-fighting T cells partially restored them, the researchers found. Drawing on the work of other groups, which had shown that reducing the amount of another protein, called PD-1, modestly improved the function of exhausted T cells, the research team next tried disabling both Sprouty-2 and PD-1 in the HIV-fighting cells. “That reversed the exhaustion completely,” Schneck says.

"By identifying Sprouty-2 and related proteins as potential targets, these results support the idea that immunotherapy may someday lead to a functional cure for HIV-1 infection,” says Joel Blankson, M.D., Ph.D., an associate professor in the Department of Medicine’s Division of Infectious Diseases, who also took part in the study.

There are no known chemical compounds that can block Sprouty-2 in living animals, so Schneck’s group plans to begin looking for one — a first step toward potentially developing new drugs based on the discovery. Schneck notes that they will also investigate whether Sprouty proteins cause exhaustion in T cells fighting other chronic infections, such as tuberculosis and hepatitis C.

Under a licensing agreement between NexImmune and the Johns Hopkins University, Drs. Schneck and Oelke are entitled to shares of royalty received by the University on sales of a product used in this study. They also own NexImmune stock, which is subject to certain restrictions under University policy. Dr. Schneck is a member of the company's Board of Directors and Scientific Advisory Board. The terms of this arrangement are being managed by the Johns Hopkins University in accordance with its conflict of interest policies.

Related Stories:
Jonathan Schneck on designing an artificial cell that conducts the symphony of the immune system