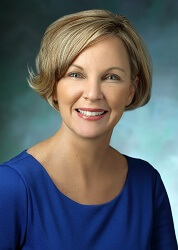 Karen M. Horton, M.D., has been named director of the Russell H. Morgan Department of Radiology and Radiological Science. She had been interim director of the department and chairman of the board of Johns Hopkins Medical Imaging, LLC, since February 2016.

Horton has distinguished herself as an innovative and effective leader since joining the radiology faculty as an assistant professor in 1998. In 2008, she became the 144th woman within the Johns Hopkins University School of Medicine to be promoted to professor at Johns Hopkins. She is a prolific researcher and a leading authority in the radiology community as an expert in body CT imaging, 3-D post-processing of CT data and virtual colonoscopy.

Horton is a frequently featured speaker nationally and has been an author on more than 250 publications. In addition to her research endeavors, Horton is a committed educator. She served as director of the Radiology Residency Program for five years, and during her tenure, she made significant improvements to the residency curriculum while working with department leaders to increase diversity by recruiting more women and underrepresented minorities.