Finding has implications for treatment of wide range of diseases
Release Date: September 30, 2011 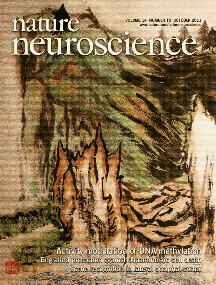 Authors of this study include the husband-wife team of Hongjun Song and Guo-li Ming; their 13-year-old son Max interpreted their discovery with an original Chinese landscape painting that appears on the current cover of Nature Neuroscience (October edition).
Max Song
Johns Hopkins scientists investigating chemical modifications across the genomes of adult mice have discovered that DNA modifications in non-dividing brain cells, thought to be inherently stable, instead underwent large-scale dynamic changes as a result of stimulated brain activity. Their report, in the October issue of Nature Neuroscience, has major implications for treating psychiatric diseases, neurodegenerative disorders, and for better understanding learning, memory and mood regulation.

Specifically, the researchers, who include a husband-and-wife team, found evidence of an epigenetic change called demethylation — the loss of a methyl group from specific locations — in the non-dividing brain cells’ DNA, challenging the scientific dogma that even if the DNA in non-dividing adult neurons changes on occasion from methylated to demethylated state, it does so very infrequently.

“We provide definitive evidence suggesting that DNA demethylation happens in non-dividing neurons, and it happens on a large scale,” says Hongjun Song, Ph.D., professor of neurology and neuroscience and director of the Stem Cell Program in the Institute for Cell Engineering of the Johns Hopkins University School of Medicine. “Scientists have previously underestimated how important this epigenetic mechanism can be in the adult brain, and the scope of change is dramatic.”

DNA comprises the fixed chemical building blocks of each person or animal’s genome, but the addition or removal of a methyl group at the specific location chemically alters DNA and regulates gene expression, enabling cells with the same genetic code to acquire and activate separate functions.

In previously published work, the same Hopkins researchers reported that electrical brain stimulation, such as that used in electroconvulsive therapy (ECT) for patients with drug resistant depression, resulted in increased brain cell growth in mice, due likely to changes in DNA methylation status.

This time, they again used electric shock to stimulate the brains of live mice. A few hours after administering the brain stimulation, the scientists analyzed two million of the same type of neurons from the brains of stimulated mice, focusing on what happens to one building block of DNA — cytosine — at 219,991 sites. These sites represented about one percent of all cytosines in the whole mouse genomes.

In collaboration with genomic biologist Yuan Gao, now at the Lieber Institute for Brain Development, the scientists used the latest DNA sequencing technology and compared neurons in mice with or without brain stimulation. About 1.4 percent of the cytosines measured showed rapid active demethylation or became newly methylated.

“It was mind-boggling to see that so many methylation sites — thousands of sites — had changed in status as a result of brain activity,” Song says. “We used to think that the brain’s epigenetic DNA methylation landscape was as stable as mountains and more recently realized that maybe it was a bit more subject to change, perhaps like trees occasionally bent in a storm. But now we show it is most of all like a river that reacts to storms of activity by moving and changing fast.”
The majority of the sites where the methylation status of the cytosine changed as a result of the brain activity were not in the expected areas of the genome that are traditionally believed to control gene expression, Song notes. Rather, they were in regions where cytosines are low in density, in genomic regions where the function of DNA methylation is not well understood.

“Our finding opens up new opportunities to figure out if these epigenetic modifications are potential drug targets for treating depression and promote regeneration, for instance,” says Guo-li Ming, M.D., Ph.D., professor of neurology and neuroscience.

Authors of the paper from Johns Hopkins in addition to Song and Ming are Junjie U. Guo, Dengke K. Ma, Eric Ford, Mi-Hyeon Jang, Michael A Bonaguidi and Yuan Gao.

Related Stories:
Guo-li Ming on how neurons make connections in the brain

Nervous System Stem Cells Can Replace Themselves, Give Rise to Variety of Cell Types, Even Amplify