Reverse triage, a strategy shown to be potentially effective in sudden increases of adult inpatients, may also be a useful tactic for pediatric hospitals.
Release Date: April 3, 2017 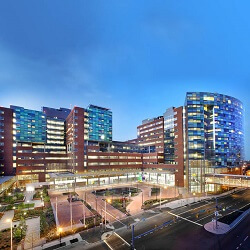 A school mass shooting. A bus accident involving children. Heat-related illnesses at a large outdoor event. These are all horrific incidents that could send dozens of young patients to a hospital at one time. When many hospitals nationwide are already filled to capacity, how can hospitals handle an unexpected surge of pediatric patients?

In a study published in the April print issue of JAMA Pediatrics, researchers at the Johns Hopkins University School of Medicine and the Johns Hopkins Office of Critical Event Preparedness and Response (CEPAR) report that reverse triage, an early discharge strategy that was shown to have high potential for adults, appears to have a more moderate, but still meaningful impact during a sudden surge of patients at a pediatric hospital.

“Preparing for an emergency rush of young patients during a disaster or other unexpected large-scale event can be challenging for an institution, particularly since children have specific medical needs,” says Gabor Kelen, M.D., director of CEPAR and the Department of Emergency Medicine at the Johns Hopkins University School of Medicine. “Our goal was to find an effective way that Johns Hopkins and other hospitals caring for children could adequately address a pediatric patient influx to ensure they are able to devote the necessary resources when needed.”

Reverse triage is a concept in which inpatients at low risk of critical health events would be discharged earlier than anticipated or transferred to lower-acuity units, giving new patients affected by the disaster equal consideration for hospital resources. For example, a patient recovering from a surgery with low risk of complications who can eat and take medications by mouth might be a candidate for reverse triage during a disaster. The strategy, the researchers note, can also be implemented during severe hospital crowding to allow improved and timely access for patients in the greatest need of care.

The study included inpatients from seven pediatric units during 196 randomly chosen mock disaster days throughout a one-year period. The researchers found that out of 501 patients sampled, more than 10 percent were eligible for immediate low-risk reverse triage, meaning the patients required no critical interventions, such as the need for IV medications, supplemental oxygen or invasive procedures, during a four-day follow-up period. More than 13 percent of patients were eligible for discharge by 96 hours. The researchers also found that by accepting moderate risks for early discharge, reverse triage would increase surge capacity up to 50 percent. Hospital surge capacity is the maximum ability to provide for the care of an unexpected large influx of patients. If multiple surge-creating strategies, like routine patient discharges and cancellation of elective and transfer admissions, were implemented along with the conservative approach to reverse triage, gross surge capacity was estimated at nearly 58 percent within 24 hours of a disaster and 84 percent by the fourth day.

“Our study involving pediatric patients showed that reverse triage appears to be a helpful strategy in an institution’s approach to increasing space during sudden influxes of pediatric patients, and implementing additional gross surge capacity strategies could have an even greater impact,” says Kelen. “One advantage of this strategy is that no incremental resources or staff members are required to care for the influx of new patients.”

The study complemented a previous study from 2009 that found reverse triage had a greater impact on surge capacity for adult patients, leading to up to 33 percent of surge capacity at the same facility. “In many cases, pediatric patients are sicker, and physicians are often more cautious about discharging them, which may explain the difference in the outcomes of our studies on adult and pediatric patients,” Kelen says.

CEPAR’s research arm, the National Center for the Study of Preparedness and Catastrophic Event Response, offers a free tool for hospitals, health systems and health departments to manage surge capacity through reverse triage and other strategies at their institutions. The tool can be downloaded here.

The study was supported in part by cooperative agreement 2010-ST-O61-PAOOO1 to the National Center for Study of Preparedness and Catastrophic Event Response at the Johns Hopkins University School of Medicine from the U.S. Department of Homeland Security and by grant 1441209 from the National Science Foundation.