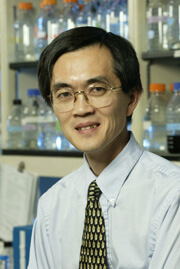 On April 3, South Korea’s Ho-Am Foundation announced that Johns Hopkins researcher Se-Jin Lee, M.D., Ph.D., has won this year’s Ho-Am Prize in Medicine. The prize, established in 1990 by the Samsung Corporation in honor of Samsung’s founder, recognizes outstanding accomplishments in medical research that pave the way to conquering disease. It is awarded each year to an ethnic Korean, and is sometimes referred to as “Korea’s Nobel.” Lee is best known for his discovery of myostatin, a hormone that regulates muscle mass, and related work that lays the foundation for new therapies for conditions such as muscle wasting and muscular dystrophy.

“It’s great to see Se-Jin’s work recognized with such a prestigious prize. He and his team have greatly advanced our understanding of signaling and muscle development,” says Carol Greider, Ph.D., the Daniel Nathans Professor and director of the Department of Molecular Biology and Genetics at the Johns Hopkins University School of Medicine.

Lee will receive the award at a ceremony in Seoul on May 31. The award amount is 300 million South Korean won, the equivalent of about $270,000.

Born in Seoul in 1958, Lee came to the United States when he was 5 years old. He graduated summa cum laude from Harvard College in 1981. He then entered the Medical Scientist Training Program at the Johns Hopkins University School of Medicine, where he pursued his graduate studies with Daniel Nathans. After earning his M.D./Ph.D. in 1989, Lee joined the Carnegie Institution of Washington’s Department of Embryology, where, as a staff associate, he began investigating the role of secreted proteins in regulating embryonic development and adult tissue homeostasis. He returned to the Department of Molecular Biology and Genetics at Johns Hopkins as a faculty member in 1991.

At Johns Hopkins, Lee discovered the hormone myostatin. Muscle cells make myostatin, which circulates through the body and blocks muscle growth. Lee showed in laboratory mice that removal of the myostatin gene results in “mighty mice” that have twice the muscle mass of ordinary mice. By exploring the components in the cell that regulate myostatin, Lee has identified several potential therapeutic targets for diseases like muscular dystrophy and muscle wasting in AIDS patients and the elderly. Pharmaceutical companies are conducting multiple clinical trials for these diseases based upon Lee’s findings. He continues to study how problems with myostatin communication contribute to disease progression, and he is working on manipulating proteins that interact with myostatin as a basis for new treatments for certain muscle diseases. Lee is a member of the National Academy of Sciences and a fellow at the American Association for the Advancement of Science.

Related Stories:
Q and A with Se-Jin Lee on myostatin and muscle mass