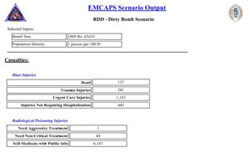 EMCAPS (Electronic Mass Casualty Assessment & Planning Scenarios), the software program is believed to be the first that generates the anticipated outcomes of disaster planning scenarios developed by the Department of Homeland Security

February 4, 2009-  A team of Johns Hopkins experts is offering a free, Web-based tool it developed that calculates and predicts in advance the impact on individual hospitals of a flu epidemic, bioterrorist attack, flood or plane crash, accounting for such elements as numbers of victims, germ-carrying wind patterns, available medical resources, bacterial incubation periods and bomb size.

“Biological, chemical, radiological or explosive attacks can bring hospitals and local health agencies to their knees, quickly overwhelming their ability to care for mass casualties,” says Gabor Kelen, M.D., head of emergency medicine at Johns Hopkins and director of Hopkins’ Office of Critical Event Preparedness and Response (CEPAR). “Our software lets users put their own information into the modeling software, customize it to their needs, and predict what they will need to handle a surge in casualties.”

Called EMCAPS (Electronic Mass Casualty Assessment & Planning Scenarios), the software program is believed to be the first that generates the anticipated outcomes of disaster planning scenarios developed by the Department of Homeland Security. The scenarios include patient estimates by injury type, estimated level of care required, and the need for decontamination facilities.

Developed by CEPAR and programmed by the Johns Hopkins Applied Physics Laboratory, EMCAPS’s details are reported in the February edition of the Annals of Emergency Medicine. The program is available for download free of cost from Johns Hopkins’ CEPAR Web site, http://www.hopkins-cepar.org/

“While the planning scenarios developed by the Department of Homeland Security form a good basis for constructing disaster exercises, EMCAPS adds value by giving hospitals a platform for providing a needed level of detail and accounting for local conditions that influence health care demand and response in their regions,” says Meridith Thanner, Ph.D., a CEPAR research associate and program manager with the National Center for the Study of Preparedness and Catastrophic Event Response.

When designing the program, EMCAPS developers selected eight of 15 Department of Homeland Security scenarios that could result in large-scale health effects: inhalation anthrax; plague; food contamination; blister, nerve and toxic agents; dirty bombs and improvised explosive device (IED) attacks. The remaining scenarios, including natural disasters and cyber attacks, were excluded from the program because of either insufficient information for computer modeling or low casualty probability as a result of an attack.

In 2005, CEPAR spearheaded the creation of the national Center for the Study of Preparedness and Catastrophic Event Response (PACER) to coordinate U.S. technological, medical and physical resources to ensure effective response to any disaster.