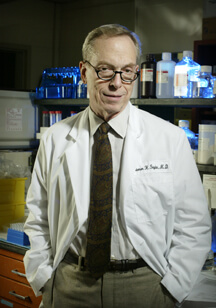 Solomon H. Snyder, M.D., has won the National Academy of Sciences (NAS) Award in Neurosciences, and King-Wai Yau, Ph.D., has won the Alexander Hollaender Award in Biophysics, the NAS has announced. Both of these prestigious awards are offered only once every three years. Snyder and Yau will receive the awards on Sunday, April 28, during the Academy's 150th annual meeting.

“We are very proud to have two of our neuroscience faculty win awards from NAS in the same year,” says Richard Huganir, Ph.D., director of the Solomon H. Snyder Department of Neuroscience. “Sol has contributed more to the field of molecular neuroscience than anyone in the world and is one of the luminaries in the field, and King’s rigorous physiological and molecular approach has made him the preeminent biophysicist in vision research.”

Snyder, a professor of neuroscience and former director of the eponymous Solomon H. Snyder Department of Neuroscience at the Institute for Basic Biomedical Sciences at the Johns Hopkins University School of Medicine, was recognized for groundbreaking discoveries ranging from the discovery of opiate receptors in the brain to proof that gases such as nitric oxide can serve as messengers between neurons. Many advances in molecular neuroscience have stemmed from Snyder's identification of receptors that neurons have for messenger molecules and some medications, a find which led to clarification of how these drugs work in the brain. His award comes with a $25,000 cash prize.

Yau, a professor of neuroscience and ophthalmology, was recognized for his work on vision. He discovered that two signaling molecules, calcium and cyclic GMP, convert light into electrical signals in the retina’s rod and cone photoreceptor cells. This work led to a greater understanding of hereditary blinding diseases that affect rod and cone cells. By characterizing the light-response behaviors of a new type of photoreceptor cell in the retina, Yau found these cells affect circadian rhythms and other nonvisual cues in the brain.

Related Stories:
Q & A with Solomon Snyder on his love of research and quest
for a Huntington’s disease treatment