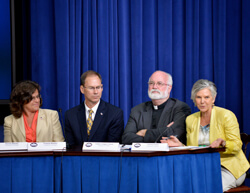 Johns Hopkins Medicine’s Pamela Paulk (right) joined Wilmington, Del., business owners Donna and Francis Masley and the Rev. Gregory Boyle, who runs a Southern California nonprofit aimed at rehabilitation and re-entry for ex-offenders, for a panel discussion at the White House on June 30.

Johns Hopkins Medicine Senior Vice President for Human Resources Pamela Paulk was recognized at the White House on Monday as a Champion of Change for her work and advocacy in the hiring of ex-offenders.

For over 10 years, Paulk and Johns Hopkins Hospital and Health System President Ronald R. Peterson have been leaders in the push to give qualified ex-offenders a second chance at a job and a life.

“First and foremost, this is a good business decision,” says Paulk. “These are good, loyal, solid workers. And I have the numbers to prove it.”

Paulk and her department conducted a sample of 80 ex-offenders hired by The Johns Hopkins Hospital in 2000. Four years later, 73 of those 80 were still employed at Johns Hopkins. A 2009 study at Johns Hopkins of almost 500 ex-offender hires showed a retention rate after 40 months that was better than a matched group of nonoffenders.

“From a business perspective, you’ve got great workers who truly are pleased to have a second chance,” notes Paulk.

Peterson lauded the efforts of Paulk and her colleagues in human resources. “We’re extremely proud of Pamela’s leadership in this area,” says Peterson, “and we’re proud of our staff members who have taken this second chance and done great things with it.”

President Barack Obama instituted the Champions of Change program to celebrate Americans whose innovative ideas have fostered positive change. The program recognizes creative solutions to problems in such areas as wage equality, energy efficiency, gun violence and other areas the president has targeted.

Paulk started the initiative to hire people whose criminal pasts might otherwise disqualify them for employment. Though not all ex-offenders are suited for the program, careful screening has made the program a success.