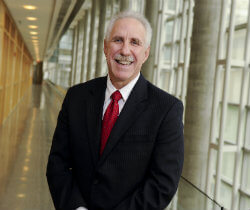 Paul B. Rothman, dean of the medical faculty and CEO of Johns Hopkins Medicine, has been named president of the Association of American Physicians, a professional organization started in 1885 by seven doctors, one of whom was William Osler, a founder of The Johns Hopkins Hospital.

“I am honored to be following in the footsteps of one of the pioneers of the hospital I am so fortunate to call home,” Rothman says. “The Association of American Physicians has for over a century worked toward the advancement of scientific and practical medicine and I look forward to leading the organization into the future.”

As dean/CEO, Rothman oversees both the Johns Hopkins Health System and the School of Medicine. A rheumatologist and molecular immunologist, he came to Hopkins in July 2012 after having served as dean of the Carver College of Medicine at the University of Iowa since 2008. Previously, he served as head of internal medicine at the University of Iowa, beginning in 2004, and prior to that as vice chairman for research and founding director of the Division of Pulmonary, Allergy and Critical Care Medicine at Columbia University College of Physicians and Surgeons, where he joined the faculty in 1986.

Election to the Association of American Physicians is an honor extended to individuals with outstanding credentials in biomedical science and/or translational biomedical research, and is limited to 60 people per year. Members have included Nobel laureates and members of the National Academy of Science and the Institute of Medicine.

Lisa Cooper is the director of the Johns Hopkins Center to Eliminate Cardiovascular Disparities. She is also the James F. Fries Professor of Medicine in the Division of General Internal Medicine at Johns Hopkins University School of Medicine. Cooper is a core faculty member of the Welch Center for Prevention, Epidemiology and Clinical Research. She has joint appointments in the Johns Hopkins University schools of nursing and public health and is a member of the American Society for Clinical Investigation. Cooper’s research program focuses on patient-centered strategies for improving outcomes and overcoming racial and ethnic disparities in healthcare. She has conducted several observational studies to explore and better define barriers to equitable care across racial and ethnic groups and mechanisms for disparities in health status and healthcare. Cooper’s research links patient and clinician attitudes and behaviors with health outcomes; her work continues to inform the training of physicians and the institutions in which they practice to deliver high quality, equitable care to increasingly diverse patient populations.

Jeremy Nathans is a professor of molecular biology and genetics, ophthalmology and neuroscience, who joined the Hopkins faculty in 1988. He identified the genes that code for the three kinds of light-sensing pigment molecules, which are critical for color vision and present in the cone cells of the retina. He also discovered some of the ways in which genes control eye development, especially the development of the retina, and contribute to inherited eye dysfunctions, such as color blindness and macular degeneration.

William Nelson is a professor of oncology and Marion I. Knott Director of the Sidney Kimmel Comprehensive Cancer Center at Johns Hopkins. Nelson is a professor of oncology, urology, pharmacology, medicine, pathology and radiation oncology. He specializes in the treatment and research of prostate cancer. Along with fellow Johns Hopkins colleagues, he discovered the most common genome alteration in prostate cancer. The discovery led to new diagnostic tests for the disease and has fueled interest in new drug discovery and other treatment options, now ongoing at Johns Hopkins.  Nelson also acts in a leadership role for the National Cancer Institute-funded Howard University Cancer Center-Sidney Kimmel Comprehensive Cancer Center Partnership Program, dedicated to building cancer research capabilities at Howard and to enhancing minority subject recruitment to cancer-research programs at Johns Hopkins.

Hamid Rabb is a professor and vice chairman for research in the Department of Medicine at Johns Hopkins, and medical director of the Johns Hopkins Kidney Transplant Program. He is a member of the American Society of Clinical Investigation, American Association of Professors, a permanent member on NIH study section, and past Chair of Scientific Studies for the American Society of Transplantation. His current research focuses on kidney renal ischemic reperfusion injury (IRI). His team has been involved in translational research to elucidate the molecular pathogenesis of kidney IRI in order to develop novel diagnostics and therapies. Specifically, they are investigating the role of cellular immunity in kidney IRI, a new area of investigation that fuses immunology, molecular biology and physiology.

Jeffrey Rothstein is a professor of neurology, director of the Brain Science Institute and director of the Robert Packard Center for ALS Research at Johns Hopkins. His clinical specialization is in neuromuscular disease, with a particular focus on ALS. Rothstein studies the basic biology of oligodendroglia and astroglia and how their basic support of neurons is dysfunctional in neurodegenerative diseases, such as amyotrophic lateral sclerosis (ALS or Lou Gehrig’s disease) and multiple sclerosis. His group generated and runs the largest National ALS iPS cell bank.  He has used iPS cells to understand ALS pathogenesis and employs the ALS iPS platform for academic and commercial drug discovery. His team has identified the major pathway responsible for ALS and frontotemporal dementia (FTD) and now is developing new drugs for personal brain therapy for ALS and FTD.