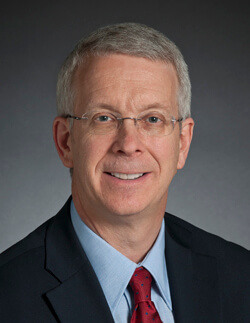 Hugh Calkins, M.D., has been elected president of the Heart Rhythm Society, an international organization of more than 5,800 specialists in heart rhythm disorders from 72 countries. Calkins was elected during the organization’s 34th Annual Scientific Sessions in Denver. He officially assumed the post on May 13, 2013.

Calkins, who is the Nicholas J. Fortuin Professor of Cardiology and a professor of medicine at the Johns Hopkins University School of Medicine, is the society’s first president from the mid-Atlantic region. He directs the Clinical Electrophysiology Laboratory, the Arrhythmia Service and the Arrhythmogenic Right Ventricular Dysplasia Program at The Johns Hopkins Hospital.

“I look forward to both the responsibilities and challenges that come with serving as the Heart Rhythm Society’s president, and I believe the year ahead will be an exciting one,” says Calkins.  “The society has an important role to play in the optimization of patient care. It is my intention to help forge new and critical efforts in research, education and international collaboration.”

Calkins recently led a 26-member international task force that, in 2012, produced a consensus statement covering all aspects of treatment for atrial fibrillation, the most common type of heart rhythm abnormality. In the consensus statement, the task force issued specific recommendations to enhance patient safety and effectiveness.

Heart rhythm disorders, also known as cardiac arrhythmias, relate to an abnormal heart beat pattern — too slow, too fast or beating in an uncoordinated manner. These disorders are very common and the risk increases with age. While some types of arrhythmia can be harmless, others can lead to serious problems, such as heart failure, stroke or even sudden cardiac death. Most arrhythmias that require treatment can be controlled with medicines, implantable devices or catheter or surgical ablation procedures. Cardiac electrophysiologists are the specialists who care for people with arrhythmias.