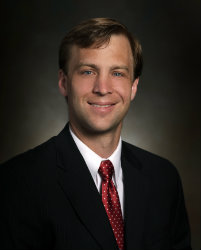 Two early career physician-scientists, Peter de Blank and Matthew R. Steensma, have been named inaugural winners of the Francis S. Collins Scholars Program in Neurofibromatosis Clinical and Translational Research, sponsored by the Neurofibromatosis Therapeutic Acceleration Program (NTAP) at The Johns Hopkins University. The program will create a community of expert clinician-scientists and groom them to be leaders in neurofibromatosis type 1 (NF1) research and clinical care. The awards will be presented at a ceremony on Tuesday, June 10, at the Whittemore House in Washington, D.C.

“It has become increasingly hard for young clinician-scientists to get the funding and dedicated time necessary to become leaders in translational science for rare diseases such as NF1,” says Jaishri Blakeley, M.D., director of the Johns Hopkins Comprehensive Neurofibromatosis Center and NTAP. “We created the Francis S. Collins Scholars Program, recognizing that a cadre of well-trained and dedicated clinician-scientists focused on NF1 is critical in order to make the scientific leaps that are possible in this modern era.”

“The Collins Scholar award offers me an unsurpassed opportunity to collaborate with world-renowned researchers in the field and work with them to find new treatments for NF1,” says Steensma, an oncology orthopaedic surgeon from Spectrum Health Medical Group and the Van Andel Institute in Grand Rapids, Michigan. "It is a tremendous honor to be named a Francis S. Collins Scholar in neurofibromatosis research. We hope to add to the legacy of discovery that began with Dr. Collins’ identification of the NF1 gene nearly a quarter-century ago.”

NF1 is a neurogenetic syndrome that causes tumors to grow throughout the body. The tumors from NF1 affect many critical structures of the nervous system. There are no approved therapies for these tumors. According to Blakeley, the complexity of NF1-associated tumors requires a multidisciplinary, team-based approach to finding therapies that may
effectively treat patients with this syndrome.

“The Johns Hopkins Department of Neurology is proud to be home to the NTAP program, and I expect the Collins Scholar award to be transformative for neurofibromatosis treatment, opening up new pathways for the care of people living with NF1,” says Justin McArthur, M.B.B.S., M.P.H., a professor of neurology, pathology and epidemiology, and neurologist-in-chief for The Johns Hopkins Hospital.

“It is a tremendous honor and privilege to serve as a Francis S. Collins Scholar,” says de Blank, a pediatric oncologist and a member of the faculty at Case Western Reserve University School of Medicine and at Rainbow Babies and Children’s Hospital in Cleveland, Ohio. “This award allows me the time, training and resources necessary to devote my career to NF clinical and translational research. Serving as one of the first Collins Scholars will be an honor I carry with me throughout my career.”

"We are grateful for the support that has made the NTAP program possible, and for the opportunity to highlight both the seminal role Dr. Collins played in defining NF1 and the work of two outstanding physician-scientists addressing important issues for patients with this disease," says Landon King, M.D., executive vice dean for the Johns Hopkins University School of Medicine.

Matthew R. Steensma, M.D., is an oncology orthopaedic surgeon from Spectrum Health Medical Group and the Van Andel Institute in Grand Rapids, Michigan. Steensma also has a faculty appointment with the Michigan State University College of Human Medicine. The scope of Steensma’s practice includes the surgical treatment of primary and metastatic tumors of the musculoskeletal system, with a focus on individuals affected by NF1.

Peter de Blank, M.D., M.S.C.E., is a pediatric oncologist and a member of the faculty at Case Western Reserve University School of Medicine and at Rainbow Babies and Children’s Hospital in Cleveland, Ohio. De Blank’s research focuses on the development of early radiographic biomarkers of functional complications of brain tumors in NF1.

Collins will attend the ceremony and give brief remarks.