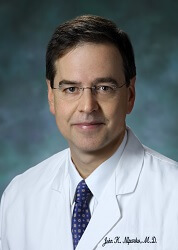 John Niparko, M.D., an internationally renowned otoneurologic surgeon and researcher whose extraordinary accomplishments as the founder of the Johns Hopkins Listening Center and pioneering innovator in cochlear implant procedures dramatically improved the lives of countless children and adults with hearing impairment, died on April 25 in Los Angeles. He was 61.

Niparko served as interim director of the Department of Otolaryngology–Head and Neck Surgery from 2009 to 2012; professor and chief of the Division of Otology, Neurotology and Skull Base Surgery; and medical director of the Division of Audiology at the Johns Hopkins University School of Medicine. Since February 2013, he had been professor and chair of the Tina and Rick Caruso Department of Otolaryngology–Head and Neck Surgery in the University of Southern California’s Keck School of Medicine in Los Angeles.

A native of Detroit, Niparko earned his bachelor’s and medical degrees from the University of Michigan, where he completed his residency in otolaryngology–head and neck surgery and a fellowship in otology, and where he later became a faculty member. He was recruited to Johns Hopkins’ Department of Otolaryngology–Head and Neck Surgery by Charles Cummings, M.D., currently executive medical director and professor of otolaryngology–head and neck surgery at Johns Hopkins, who sensed great promise in his restless energy. Indeed, Niparko transformed the Division of Otology, Neurotology and Skull Base Surgery by training a long line of residents and fellows who now serve in leadership positions throughout the world in otology, neurotology and other otolaryngology specialties.

Niparko formed the Johns Hopkins Listening Center 25 years ago and built it up to be one of the pre-eminent cochlear implant programs in the U.S. His landmark research through the National Institute on Deafness and Other Communication Disorders’ Childhood Development and Cochlear Implantation grant laid the foundation for our understanding of the role that cochlear implants can play in the development of children with hearing loss. “His holistic approach appreciated the socioeconomic and parental factors essential to the success of these implants,” says David Eisele, M.D., the Andelot Professor of Laryngology and Otology and director of the Department of Otolaryngology–Head and Neck Surgery at Johns Hopkins. “As a surgical leader, he modeled professionalism in the immense respect he showed for his rehabilitation team, whose work would ultimately determine the success of the implants.”

Considered a premier physician-scientist who undertook groundbreaking research and surgical innovations to address disorders of the ear and skull base, Niparko was a leading authority on implantable devices to improve the hearing of the profoundly deaf and severely hard of hearing. Under  Niparko’s leadership, the Johns Hopkins Listening Center’s Cochlear Implant Program became the largest of its kind in the country, acclaimed for its clinical excellence and postoperative rehabilitation methods. In 2001, Niparko became the inaugural George T. Nager Professor of Otolaryngology–Head and Neck Surgery.

“John was a dynamic yet humble man, a superb academic surgeon-scientist and a great Johns Hopkins leader,” says Eisele. “He will be sorely missed by the countless residents, fellows, colleagues and patients he touched.”

He is survived by his wife, Angela, his two sons, Nathan and Kevin, and his siblings, Nancy and Steve.