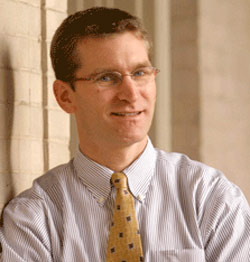 The Johns Hopkins Medicine community mourns the untimely death of John Griffith, M.D., M.P.H., who was killed Saturday while bicycling south of Rehoboth Beach in Delaware. Griffith, 44, was a full-time assistant professor in The Johns Hopkins University School of Medicine and director of the Fibroid Center for the Department of Gynecology and Obstetrics at Johns Hopkins.

“The Department faculty, postgraduate physicians, nurses and staff are deeply shocked and saddened at John’s sudden and tragic death,” said Harold Fox, M.D., director of gynecology and obstetrics at Johns Hopkins. “John was a rising star who has fallen from the sky. Our thoughts today are with his loving family.”

“John will be greatly missed,” said Edward D. Miller, M.D., dean and CEO of Johns Hopkins Medicine. “Our thoughts and prayers go out to his wife and children and the rest of his family, whose ties to Hopkins are deep and longstanding.” His father, Lawrence S.C. Griffith, M.D., is a cardiologist and professor of medicine at Hopkins.

Griffith graduated from Case Western University School of Medicine in Cleveland, Ohio. He earned a bachelor of arts from Haverford College, as well as a master’s degree in public health from the UCLA School of Public Health. He completed his residency training in obstetrics and gynecology at the University Hospitals of Cleveland, where he was the executive chief resident.

In 2005, Griffith was named director of the Johns Hopkins Fibroid Center, a new clinical and research center within Johns Hopkins Medicine. At the Center, he led a team of one dozen faculty and 40 additional staff that includes interventional radiologists, reproductive endocrinologists, geneticists, nurses and public health experts.

“John was a true academic and leader, recognized regionally and nationally as an authority in the development and use of minimally invasive surgical techniques to treat uterine and cervical disorders,” said Fox. “He developed not only the Fibroid Center but also a superb endoscopic surgery training program for obstetrical and gynecologic surgeons. John improved the lives of countless women.”

Colleagues noted that Griffith was dedicated to linking clinical practice to research, considering this the best way to find and rapidly apply new medical or surgical approaches to the treatment of fibroids — mostly benign growths in the lining of the womb that can cause severe pain, bleeding and disability. His research also focused on why some women are more prone to develop them, findings that could shed light on what might prevent them. In addition to the treatment of uterine fibroids, Griffith's clinical interests included the management of abnormal Pap smears, ovarian cysts and abnormal menstrual periods.

Delaware police reports say that Griffith, who was vacationing with family in Rehoboth, was riding his bicycle southbound on the shoulder of Coastal Highway about a mile north of the Indian River Inlet Bridge when a car struck him after he stopped on the shoulder to repair a broken chain.

In addition to his parents, Griffith is survived by his wife, Liz, and children — Henry, Isabel and Anna.