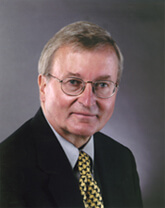 August 6, 2009-John D. Strandberg, Distinguished Member of the American College of Veterinary Pathologists and former director of the Division of Comparative Medicine at the Johns Hopkins University School of Medicine, passed away on Aug. 1 in St. Paul, Minn. after a long illness. He was 69.

Strandberg was director of the Division of Comparative Medicine (now the Department of Molecular and Comparative Pathobiology) from 1982 to 1999 and built a strong division that provided clinical care and pathological expertise for biomedical research involving animals. In addition to his tenure as director, he directed the Comparative Pathology and Laboratory Animal Medicine Training programs at Johns Hopkins for three decades, mentoring more than 60 pathologists and laboratory animal veterinarians.

“He was a beloved teacher and mentor for many faculty and students,” says M. Christine Zink, D.V.M., Ph.D., professor and director of the Department of Molecular and Comparative Pathobiology at Johns Hopkins. ”He established Johns Hopkins as a major force in the use of animal models to study the mechanisms of diseases, such as cancer and AIDS.”

Strandberg, a research pathologist, collaborated widely and served on several national committees that developed policies for the humane use of research animals, Strandberg also participated in NIH study sections and site visits, while pursuing his own research interests, particularly on prostate cancer. He left his mark on more than 120 peer-reviewed publications.

“The breadth and depth of Dr. Strandberg’s knowledge seemed infinite, yet he always shared it with humility and compassion and an abundance of humor,” says Janice Clements, Ph.D., the Mary Wallace Stanton Professor of Faculty Affairs, Vice Dean for Faculty and professor of Molecular and Comparative Pathobiology. “His friends and colleagues remember him as a truly kind and generous person who readily shared his home with traveling scholars, cooked elaborate, delicious meals to congratulate each veterinary trainee as he or she moved on to the next stage in their lives, played the piano for his frequent house guests and often gave his lunch to homeless people on his way to work.”

Sandberg is survived by his sister, Jean Strandberg Goldstein, of Columbia, Mo and two brothers, William Strandberg of Alexandria, MN and Paul Strandberg of Roseville, MN. A memorial service in Strandberg’s honor will be held in Baltimore in September. Memorial contributions may be made to the John D. Strandberg Fund to support future trainees.