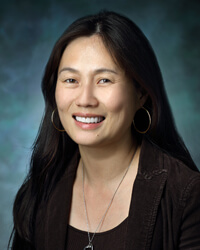 Jie Xiao, Ph.D., an associate professor of biophysics and biophysical chemistry at the Johns Hopkins University School of Medicine, has won the inaugural Hamilton Smith Award for Innovative Research. The award provides research funds for promising junior researchers at the medical school whose work is laying the foundation for future medical advances. It is named for a Nobel Prize winner whose discovery (see VIDEO) while he was a young faculty member at Johns Hopkins revolutionized the field of biology. Hamilton Smith discovered restriction enzymes, which cut DNA. Researchers have since harnessed their power to sequence the human genome and develop new medicines, among many other applications.

Xiao works at the frontier of imaging dynamic processes in live cells. She and her team have devised novel methods to visualize the dynamics of how gene use is turned “up” and “down,” and have also pioneered the use of very-high-resolution imaging to find out the structural and functional details of bacterial cell division.

Xiao’s work has been recognized by a March of Dimes Basil O’Connor Starter Scholar Research Award and a National Science Foundation CAREER Award. She has also been active in outreach efforts and founded the Fun with Science Summer Camp, an annual weeklong program that exposes Baltimore City middle school students to the excitement of science through hands-on activities.