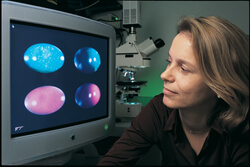 The American Academy of Arts and Sciences (AAAS) has elected Johns Hopkins researcher Geraldine Seydoux, Ph.D., as part of its class of 2013. Founded in 1780, the AAAS has a long history of bringing together leading scholars from every discipline to study the complex policy problems facing our world. This year’s new members will be announced on April 24 and inducted at a ceremony on Oct. 12 at the Academy’s headquarters in Cambridge, Mass.

Seydoux is a professor of molecular biology and genetics in the Center for Cell Dynamics at the Johns Hopkins University School of Medicine. She received her Ph.D. in molecular biology from Princeton University in 1991 and was then a postdoctoral fellow in developmental biology at the Carnegie Institution of Washington. She came to the School of Medicine in 1995 and rose through the ranks to become a full professor in 2004. Since 2005, she has been an investigator with the Howard Hughes Medical Institute.

Seydoux’s lab uses genetic and molecular techniques to study early embryo development in the worm Caenorhabditis elegans (C. elegans). In particular, they are interested in learning what distinguishes egg and sperm precursor cells from the rest of the body’s precursor cells in early embryos. Egg/sperm precursors develop in the tail end of embryos, and the rest of the cells develop toward the front. Seydoux studies how single-celled embryos determine polarity—which “end” will become the head or tail. Seydoux and her team found that polarity is established by a structure brought into an egg by the sperm. In early egg and sperm precursor cells, they also discovered that genes are not actively read to create proteins. Both observations have since been made in other animals, as well.

Seydoux is currently an editor for the journal Development and serves on the editorial board of Cell and Developmental Cell. She is a past member of the board of directors for the Genetic Society of America. She has served as a regular member of the NIH study section on development and as a scientific reviewer for the study section on reproductive biology. She is also the recipient of numerous awards, including the NIH Presidential Early Career Award for Scientists and Engineers in 1999, a MacArthur Fellowship from the John D. and Catherine T. MacArthur Foundation in 2001 and the Johns Hopkins Professors’ Award for Excellence in Teaching in the Preclinical Sciences in 2010.

On the Web:
Seydoux Lab