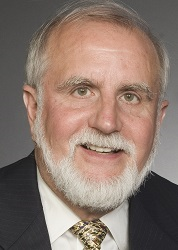 James C. Harris, M.D., founding director of the Developmental Neuropsychiatry Program at The Johns Hopkins University and the Kennedy Krieger Institute, and professor of psychiatry and behavioral sciences and pediatrics at The Johns Hopkins University, will be presented with the Catcher in the Rye Advocacy Award to an Individual on Oct. 24 at the annual meeting of the American Academy of Child and Adolescent Psychiatry (AACAP).

The award was established by the AACAP in 1996 to honor a child psychiatrist who has made significant contributions to society through the support of child and adolescent psychiatry. The award takes its name from the J.D. Salinger best-selling book The Catcher in the Rye, which includes a scene where the narrator imagines himself as a guardian responsible for saving the lives of children at risk of falling off a cliff.

The award citation for Harris credits him with being a “steadfast advocate” who has “worked tirelessly on behalf of children, adolescents, and their families.”

Harris is a past director of the Johns Hopkins Division of Child and Adolescent Psychiatry. His nationally recognized, award-winning textbook Developmental Neuropsychiatry and his Intellectual Disability textbooks are standard works for child psychiatrists. He says his advocacy for children with developmental disabilities was stimulated by his experiences dealing with ethical issues during his pediatric residency at Johns Hopkins.

Harris also served as psychiatric adviser to Eunice Kennedy Shriver, who founded the Special Olympics, and he participated with her in the last White House Conference on Mental Health.

Upon learning he was to receive the Catcher in the Rye Award, Harris expressed his appreciation of the AACAP and lauded others. “Thanks to the children with developmental disabilities and their families who taught me how much advocacy matters and what it can accomplish,” he said. “Special thanks to my wife, Cathy DeAngelis, a past recipient of a Catcher in the Rye Humanitarian Award, R.E. Cooke, Hugo Moser, Leon Eisenberg and Eunice Shriver — all of whom inspired my advocacy.”