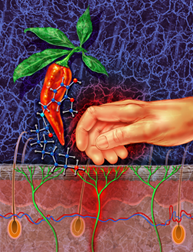 An artist’s rendition of nerve cells monitoring the surface of the skin where they may encounter pain stimulants like capsaicin, found in hot peppers, and itch stimulants like histamine.
copyright Tim Phelps Department of Art as Applied to Medicine Johns Hopkins University, 2012

Johns Hopkins researchers have uncovered strong evidence that mice have a specific set of nerve cells that signal itch but not pain, a finding that may settle a decades-long debate about these sensations, and, if confirmed in humans, help in developing treatments for chronic itch, including itch caused by life-saving medications.

At the heart of their discovery is a type of sensory nerve cell whose endings receive information from the skin and relay it to other nerves in the spinal cord, which then coordinates a response to the stimulus. Published online Dec. 23 in Nature Neuroscience, a report on the research suggests that even when the itch-specific nerve cells receive stimuli that are normally pain-inducing, the message they send isn’t “That hurts!” but rather “That itches!”

Pain and itch are both important sensations that help organisms survive. And pain is arguably more important because it tells us to withdraw the pained body part in order to prevent tissue damage. But itch also warns us of the presence of irritants, as in an allergic reaction. However, “when either of these sensations continues for weeks or months, they are no longer helpful. We even see patients stop taking life-saving medications because they cause such horrible itchiness all over,” says Xinzhong Dong, Ph.D., a Howard Hughes early career scientist and associate professor of neuroscience at the Institute for Basic Biomedical Sciences at the Johns Hopkins University School of Medicine. “And sometimes when we try to suppress chronic pain, with morphine for example, we end up causing chronic itchiness. So the two sensations are somehow related, and this study has begun to untangle them,” he says.

Because nerve cells send their messages as electrical currents that flow through them just as they would through wires, scientists can plug tiny monitors into individual nerve cells to detect the moment of stimulation. The scientific controversy over pain and itch centers around a group of nerve cells known to respond electrically to painful stimuli such as molecules of capsaicin, the fiery ingredient in chili peppers. A small subset of these nerve cells also responds electrically to itchy stimuli because they have on their surfaces receptors for molecules like histamine. One of these itchy receptors, called MrgA3, binds the anti-malaria drug chloroquine, causing serious itchiness in many patients.

Sensory nerve scientists have not known whether the nerves with itchy receptors and pain receptors were actually sending both types of messages to the brain, or just itch messages. What the current study found is that, in nerves with the itchy receptor MrgA3, electrical signals sent in response to both painful and itchy stimuli are interpreted by the brain as itch.

To reach this conclusion, the researchers first used a genetic trick to label the MrgA3 cells in mice with a glowing protein that allowed them to see the cells under the microscope. Aided by the glow, they were able to plug in those tiny electricity monitors and watch nerve cell responses to different stimuli. The cells transmitted electrical signals when the mice were exposed to itch-inducing chloroquine and histamine, as well as pain-inducing capsaicin and heat. Based on this result, the researchers tentatively concluded that the cells could send both pain and itch signals.

In the next experiment, the researchers monitored the behavioral responses of mice to the different stimuli. As expected, when the tails of normal mice were placed in hot water, they quickly pulled them out; when normal mice were given a bit of chloroquine or histamine, they scratched vigorously with their hind legs.

Then, to examine the role of MrgA3 cells in pain and itch, the scientists selectively killed MrgA3 nerve cells in adult mice and retested their responses. Presumably, the researchers noted, because MrgA3 cells are only a small fraction of all pain-sensing nerve cells, the mice had normal withdrawal responses to painful stimuli like hot water. However, when exposed to itchy stimuli, their scratching responses were reduced to varying degrees depending on the stimulus, most significantly in response to chloroquine. The fact that some stimuli still caused scratching suggested to the scientists that MrgA3 cells are not the only ones in the body that respond to itch. “We were convinced that MrgA3 cells are responsible for much of the sensation of itch, but it wasn’t yet clear whether MrgA3 cells could also relay painful information,” says Dong.

In their final experiments, the scientists used genetic techniques to create mice in which the MrgA3 cells were the only cells in the body capable of responding to capsaicin, that peppery pain-inducing substance. When injected into the cheeks of mice, normal mice massage the area with their forepaws to relieve the hot sensation. When injected into the experimental mice, they vigorously scratched their cheeks with their hind legs, suggesting that this normally painful stimulus had been communicated to the brain—by MrgA3 cells—as itchiness.

"Now that we have disentangled these itchy sensations from painful ones, we should be able to design drugs that target itch-specific nerve cells to combat chronic itchiness," says Dong. "We hope that this will not only provide relief, but also increase people's faithfulness to their drug plans, particularly for deadly diseases like malaria and cancer."

The authors have no competing interests to disclose.

Related Stories:
Xinzhong Dong on the molecules behind the itch

Taking a Chance: Assuming a larger role in drug discovery