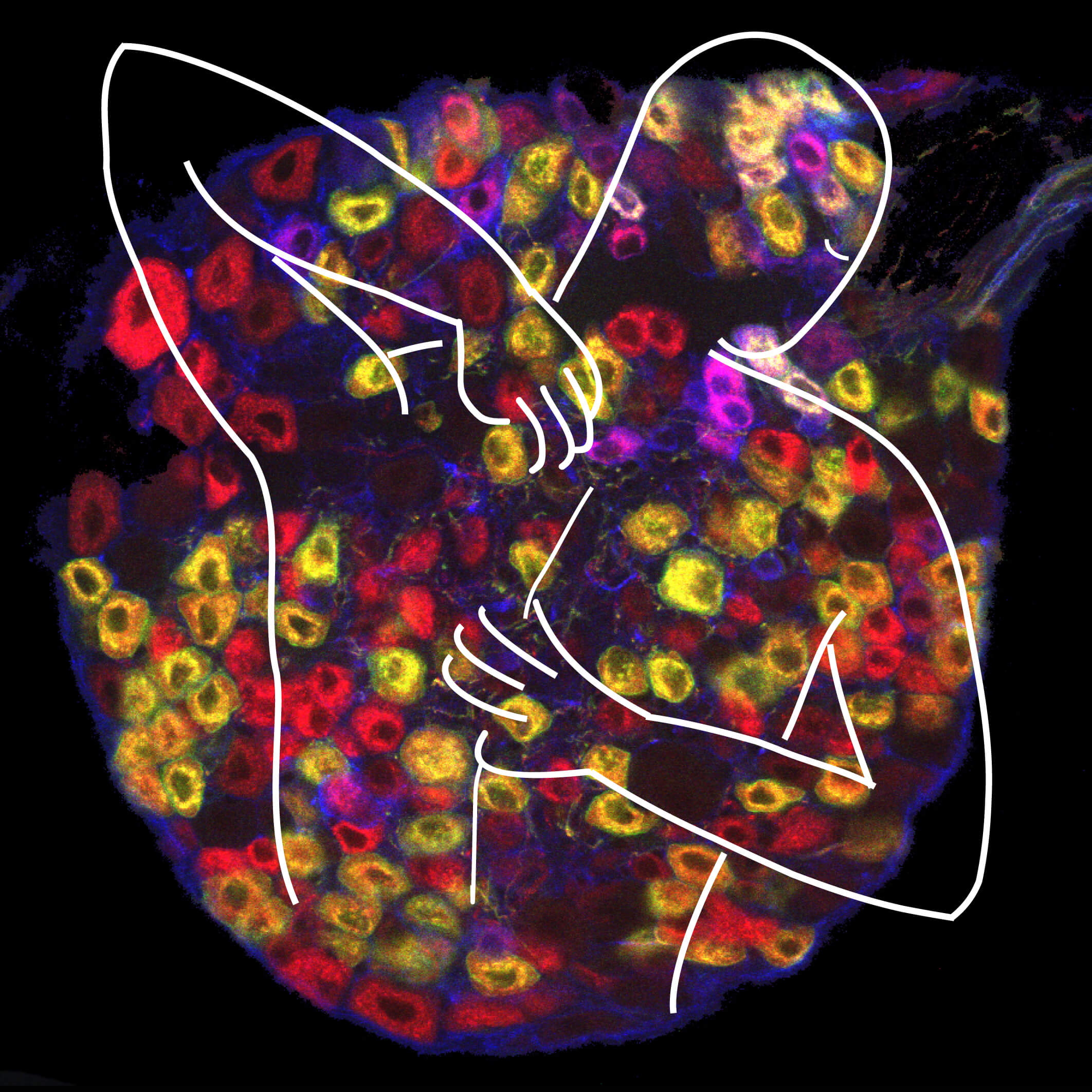 There are neurons in your skin that are wired for one purpose and one purpose only: to sense itchy things. These neurons are separate from the ones that detect pain, and yet, chemical-induced itch is often accompanied by mild pain, such as burning and stinging sensations. But when it comes to sending signals toward your brain through your spinal cord, itch and mild pain can go through the same set of spinal cord neurons, researchers report Feb. 22 in Neuron. This finding explains why pain often accompanies intense, chemical-induced itch.

“To our surprise, we found the spinal cord neurons receiving the peripheral pain and itch inputs are not separate. They can receive signals from itch fibers and also pain fibers,” says Xinzhong Dong, Ph.D., professor of neuroscience at the Johns Hopkins University School of Medicine and Howard Hughes Medical Institute investigator, who led the study. These neurons, called the GRP neurons, are a way station for pain and itch signals on their way to the brain.

However, GRP neurons are not passive conduits, the researchers found. “When we eliminate this population of neurons in mice, the itch response is reduced. They scratch less,” says first author Shuohao Sun, a graduate student at Johns Hopkins. “But at the same time, the pain response is actually increased.”

Mice without GRP neurons spent more time rubbing and licking to alleviate their pain, induced, for example, by exposing their tails to hot water. Further experiments that tracked electrical signaling through the neurons corroborated the result. Even though the GRP neurons seemed to be forwarding mild pain signals to the next neural relay station, they also seemed to mitigate intense pain signals.

“It might sound counterintuitive, but we suggest that this small group of cells actually functions like a braking system for pain,” says Sun. “This brake is not always triggered by the painful stimuli; it’s only triggered by the strong pain stimuli. When the brake is on, the signal doesn’t go through. But when you have a weak pain signal, it doesn’t trigger the brake, and the signal can go through.” The researchers have named this hypothesis “the leaky gate” model.

When the mice’s GRP neurons have been destroyed, the brake lines have essentially been cut, resulting in an uncontrolled cascade of pain. The braking system may be a way for animals to detect mild pains — like the kinds associated with itchy substances — without becoming overwhelmed by the pain, the researchers say. Built-in pain management would likely be a helpful adaptation for escaping from predators while injured.

At the same time, GRP neurons are not the only group of spinal cord neurons that receive and forward pain signals to the brain, and the brain itself plays a central role in translating signals from peripheral neurons into experienced sensation. Questions remain about what happens to the signals from GRP neurons after they’re transported up the spinal cord.

Chronic pain and itch affect about one in 10 Americans, the authors say. A better understanding of pain and itch signals’ journey to the brain may eventually lead to new treatment options. “The next step is moving even further into the central nervous system and seeing how the signal from the secondary neuron is getting to the next relay station,” says Dong. “We go one step at a time.” – text courtesy of Cell Press