Is it a Stroke or Benign Dizziness? A Simple Bedside Test Can Tell 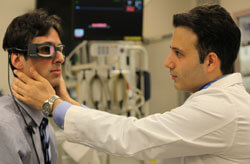 Georgios Mantokoudis, left, and Ali Tehrani demonstrate the use of a video-oculography machine that detects minute eye movements that are difficult for most physicians to notice and can help diagnose stroke. (Credit: Johns Hopkins Medicine)

A bedside electronic device that measures eye movements can successfully determine whether the cause of severe, continuous, disabling dizziness is a stroke or something benign, according to results of a small study led by Johns Hopkins Medicine researchers.

"Using this device can directly predict who has had a stroke and who has not," says David Newman-Toker, M.D., Ph.D., an associate professor of neurology and otolaryngology at the Johns Hopkins University School of Medicine and leader of the study described in the journal Stroke. "We’re spending hundreds of millions of dollars a year on expensive stroke work-ups that are unnecessary, and probably missing the chance to save tens of thousands of lives because we aren’t properly diagnosing their dizziness or vertigo as stroke symptoms."

Newman-Toker says if additional larger studies confirm these results, the device could one day be the equivalent of an electrocardiogram (EKG), a simple noninvasive test routinely used to rule out heart attack in patients with chest pain. And, he adds, universal use of the device could "virtually eliminate deaths from misdiagnosis and save a lot of time and money."

To distinguish stroke from a more benign condition, such as vertigo linked to an inner ear disturbance, specialists typically use three eye movement tests that are essentially a stress test for the balance system. In the hands of specialists, these bedside clinical tests (without the device) have been shown in several large research studies to be extremely accurate -- "nearly perfect, and even better than immediate MRI," says Newman-Toker. One of those tests, known as the horizontal head impulse test, is the best predictor of stroke. To perform it, doctors or technicians ask patients to look at a target on the wall and keep their eyes on the target as doctors move the patients’ heads from side to side. But, says Newman-Toker, it requires expertise to determine whether a patient is making the fast corrective eye adjustments that would indicate a benign form of dizziness as opposed to a stroke.

For the new study, researchers instead performed the same test using a small, portable device -- a video-oculography machine that detects minute eye movements that are difficult for most physicians to notice. The machine includes a set of goggles, akin to swimming goggles, with a USB-connected webcam and an accelerometer in the frame. The webcam is hooked up to a laptop where a continuous picture of the eye is taken. Software interprets eye position based on movements and views of the pupil, while the accelerometer measures the speed of the movement of the head.

Newman-Toker says the test could be easily employed to prevent misdiagnosis of  as many as 100,000 strokes a year, leading to earlier stroke diagnosis and more efficient triage and treatment decisions for patients with disabling dizziness. Overlooked strokes mean delayed or missed treatments that lead to roughly 20,000 to 30,000 preventable deaths or disabilities a year, he says. The technology, he adds, could someday be used in a smartphone application to enable wider access to a quick and accurate diagnosis of strokes whose main symptom is dizziness, as opposed to one-sided weakness or garbled speech.

The diagnosis of stroke in patients with severe dizziness, vomiting, difficulty walking and intolerance to head motion is difficult, Newman-Toker says. He estimates there are 4 million emergency department visits annually in the United States for dizziness or vertigo, at least half a million of which involve patients at high risk for stroke. The most common causes are benign inner ear conditions, but many emergency room doctors, Newman-Toker says, find it nearly impossible to tell the difference between the benign conditions and something more serious, such as a stroke. So they often rely on brain imaging - usually a CT scan, an expensive and inaccurate technology for this particular diagnosis.

The Hopkins-led study enrolled 12 patients at The Johns Hopkins Hospital and the University of Illinois College of Medicine at Peoria, who later underwent confirmatory MRI. Six were diagnosed with stroke and six with a benign condition using video-oculography. MRI later confirmed all 12 diagnoses.

The device was developed overseas and is used in balance clinics there, but is not yet approved for use in the United States. A company, GN Otometrics, which makes the devices used in Newman-Toker’s proof-of-concept study, loaned them to the research team, but did not have any involvement, financial or otherwise, in the study, he says.

Newman-Toker says head CT scans are ordered for roughly 40 percent of patients who come to the emergency room with dizziness, but that CT misses more than 80 percent of acute strokes occurring in the brainstem and cerebellum, making it impossible to rule out stroke in dizzy patients this way. Instead, MRI is the definitive test, though it isn’t readily available in many emergency departments or in rural hospitals, and it costs roughly four times the price of a CT scan. MRI also misses 10 to 20 percent of this type of stroke in the first 48 hours after symptoms begin, he says.

The research was supported by grants from the Swiss National Science Foundation (PBBEP2 136573), the Agency for Healthcare Research and Quality (R18 HS017690) and the National Institutes of Health’s National Center for Research Resources (K23 RR024009) and National Eye Institute (R01EY019347).