Depression is common in patients with central vision loss, but study suggests that low vision rehabilitation and occupational therapy could decrease its severity
Release Date: March 8, 2017 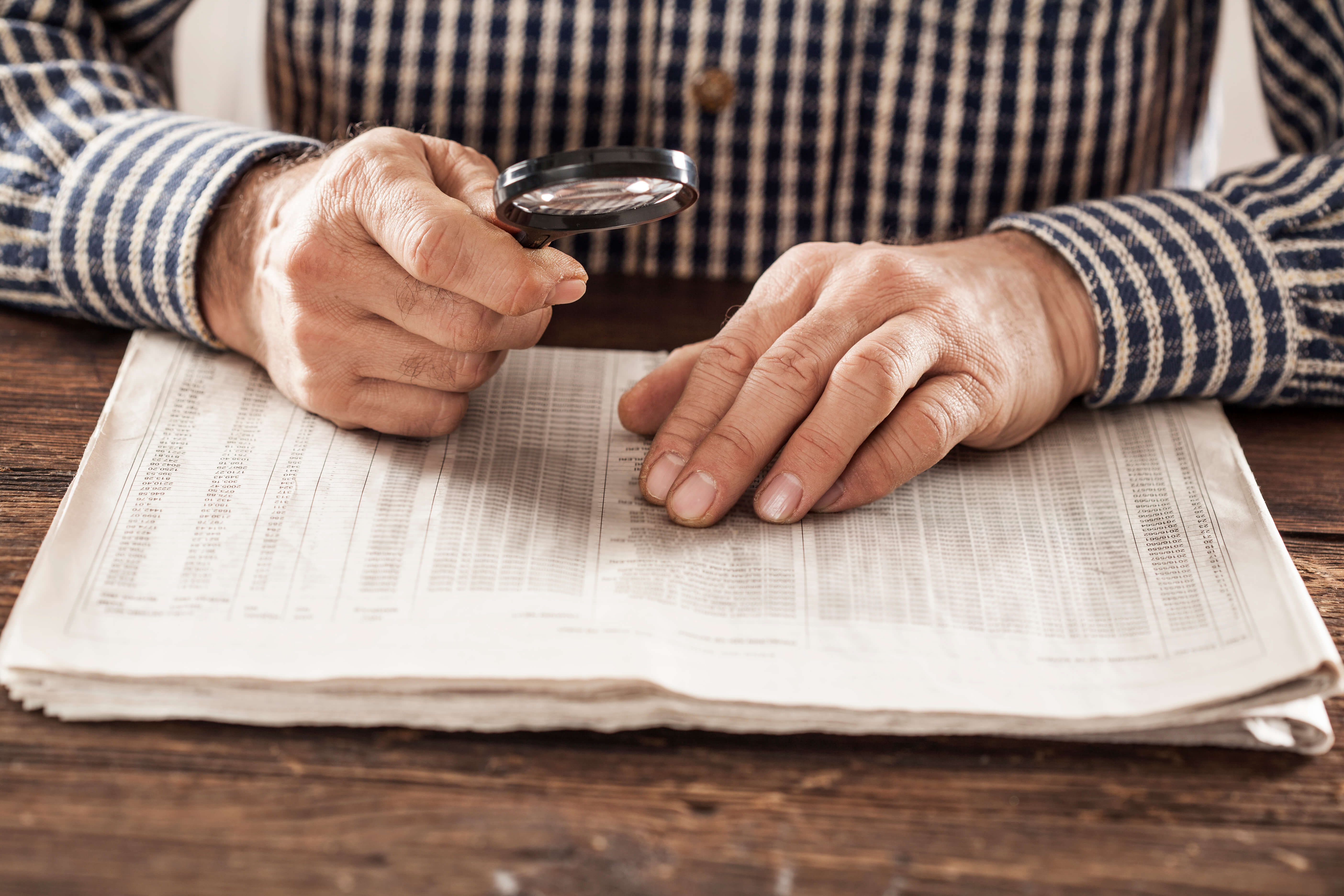 Magnifying glasses were one tool occupational therapists used in this study to help patients achieve daily activities, like reading the newspaper.
Credit: iStock

Johns Hopkins researchers report that in-home occupational therapy appears to reduce the rate and severity of depression in people at higher risk for the disorder because of seriously impaired vision.

The Centers for Disease Control and Prevention says older adults in the United States are already at an increased risk of depression as their health and social lives change. Vision-impairing diseases, such as age-related macular degeneration, contribute to these changes for an estimated 1.6 million Americans.

The new study, described March 8, in Investigative Ophthalmology & Visual Science, used measures obtained from the previous Low Vision Depression Prevention Trial in Age-Related Macular Degeneration (VITAL) study to conclude that low-vision patients who improve in their day-to-day functions, such as cooking, reading mail or using a computer, through at-home training with an occupational therapist have less severe symptoms of depression than similar patients who did not train with an occupational therapist.

“Our goal for this study was to see if occupational therapy was a better investment than supportive therapy in preventing depression in low-vision patients,” says Ashley Deemer, O.D., instructor of ophthalmology at the Johns Hopkins University School of Medicine.

The study was based on information originally gathered for the VITAL study at Thomas Jefferson University in Philadelphia and included data on 188 patients with age-related macular degeneration. The patients’ average age was 84, and 70.2 percent of the patients were women. The patients had an average visual acuity of 20/96, meaning that the average person in this study could see an object 20 feet away, while someone with normal vision could see the same object at 96 feet. All patients also reported borderline depressive symptoms, scoring greater than five on the Patient Health Questionnaire-9, a clinical survey used to estimate depression risk. In this survey, a score of zero is an indication that the patient has no depression or is at a low risk, and a score of 20 or higher marks a patient as at risk for severe depression.

After enrollment in the study, all patients visited a low vision rehabilitation optometrist and filled out a questionnaire designed to assess the importance and difficulty of daily activities, such as cooking, driving, pleasure reading and using a computer.

“For example, if a patient had difficulty reading his or her mail, the therapist would use a magnification device to train and practice with the patient until he or she could successfully read the mail,” says Deemer.

The supportive therapy group acted as a control group for comparison. These patients met with a social worker for six one-hour sessions of talk therapy, which emphasized personal expression about loss and disability. In essence, the researchers say, this group got attention and empathetic support but not specific occupational therapy directed to improve their ability to function.

At this follow-up, the researchers found that 26 percent of the supportive therapy patients reported that their depression symptoms worsened, while only 12 percent of the occupational therapy patients reported worsening symptoms. In total, these data show that while both forms of therapy decreased depression in patients, the group that received occupational therapy reduced its risk of depression by much more.

Deemer says the costs associated with occupational therapy are often covered by Medicare, but such services appear to be underutilized.

“Many caregivers and patients may not realize how prevalent depression is among people with low vision, and our duty as health care providers is to raise awareness of the problem and the availability of help,” says Deemer. “It is good practice not only to refer low vision patients to a mental health expert, but to also suggest low vision rehabilitation and occupational therapy, which could have a huge impact on our patients’ lives.”

This work was supported by National Eye Institute grant U01 EY018819.