Immunotherapy Drug Shrinks Tumors in Half of Patients with Rare, Virus-Linked Skin Cancer - 04/19/2016

Immunotherapy Drug Shrinks Tumors in Half of Patients with Rare, Virus-Linked Skin Cancer 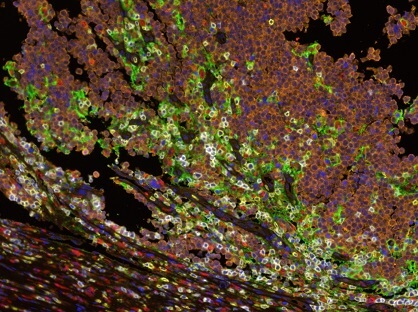 In a clinical trial of the immunotherapy drug pembrolizumab, half of 25 patients with a rare type of virus-linked skin cancer called Merkel cell carcinoma experienced substantial tumor shrinkage lasting nearly three times as long, on average, than with conventional chemotherapy. Several patients had no remaining evidence of disease. Results of the study are expected to be presented at the American Association for Cancer Research (AACR) Annual Meeting 2016 (abstract CT096) in New Orleans and published online April 19 in the New England Journal of Medicine.

Scientists at the Fred Hutchinson Cancer Research Center and the Johns Hopkins Kimmel Cancer Center, who led the study, say the results could be a harbinger of how some patients with other virus-associated cancers, which account for more than 20 percent of cancers worldwide, may respond to an entire class of immunotherapy drugs called immune checkpoint blockers or inhibitors.

“What we found in this preliminary study of patients with Merkel cell cancer may not be true for every virus-induced cancer,” says Suzanne Topalian, M.D., professor of surgery and oncology and associate director of the Bloomberg~Kimmel Institute for Cancer Immunotherapy, “but if additional studies with more patients confirm our findings, we will have strong reason to believe that many cancers with virus-linked proteins could be valid targets for immune checkpoint blockade.”

Merkel cell carcinoma, classified as an “orphan disease,” is diagnosed in less than 2,000 people annually in the United States. It tends to occur in older people and those who have suppressed immune systems, says William Sharfman, M.D., associate professor of oncology and dermatology and director of cutaneous oncology at the Johns Hopkins Kimmel Cancer Center. Most Merkel cell carcinomas — approximately 80 percent — are caused by a virus called Merkel cell polyomavirus. The rest are caused by exposure to ultraviolet light and other unknown factors.

Investigators at eight medical centers across the U.S., including the Johns Hopkins Kimmel Cancer Center and the Fred Hutchinson Cancer Research Center, enrolled 26 patients with metastatic or recurrent Merkel cell carcinoma who had not previously received any systemic therapies for advanced disease. All of the patients had received standard therapy with surgery and/or radiation therapy. One patient did not receive imaging scans in time to include the outcomes among the findings, and one patient had chemotherapy six months before the current study began, before the patient developed evidence of advanced disease.

Each of the patients received the immune checkpoint blocking drug pembrolizumab intravenously every three weeks and received imaging scans every two to three months while receiving the drug. Pembrolizumab was approved by the U.S. Food and Drug Administration in 2014 for advanced lung cancer and melanoma, and its high cost of more than $10,000 per month, Johns Hopkins experts say, drives the need to better define which patients are more likely to respond to it.

The researchers identified patients who responded to the drug according to standard oncology benchmarks — that is, after two sets of imaging scans at least one month apart showed 30 percent or more shrinkage in measured tumors and no new lesions.

In the study, 14 of 25 patients (56 percent) whose scans were evaluated responded to the drug. Four of those patients had a complete response, with no remaining radiologic evidence of cancer. Twelve of the 14 continued to respond to the drug after a median follow-up time of 33 weeks — more than eight months — ranging from seven to 53 weeks.

According to Evan Lipson, M.D., assistant professor at the Johns Hopkins Kimmel Cancer Center, about half of patients with Merkel cell carcinoma typically respond to various chemotherapy combinations, but their cancers recur after an average of three months. “Compared with traditional chemotherapy, about the same percentage of patients responded to pembrolizumab in this study, but these patients’ responses were longer lasting,” he says.

Slightly more patients with virus-linked Merkel cell carcinoma responded to the drug —10 of 16, or 63 percent — than patients whose cancers were not linked to the virus — four of nine, or 44 percent. Four of the 26 patients (15 percent) experienced serious toxicities. One had a cardiomyopathy, and another had elevated liver enzymes but improved after experiencing these side effects. Ten patients who did not respond to pembrolizumab had either stable or progressive disease; another had an unconfirmed response.

Pembrolizumab blocks a protein called PD-1 found on the surface of immune system T cells. The blockade cuts off a molecular “handshake” between the T cells and cancer cells carrying so-called PD-L1 proteins on their surface. When the handshake doesn’t happen, T cells recognize the cancer cells as foreign and mark them for destruction.

Looking for such proteins among archived Merkel cell carcinoma samples, the Johns Hopkins and Fred Hutchinson Cancer Research Center scientists found PD-L1 proteins on the cancer cells and PD-1 proteins expressed on the surface of T cells specific for the Merkel cell virus. However, in this study, Topalian says, there was no correlation between expression of PD-L1 in the tumor and response to pembrolizumab. “Even if we don’t find a biomarker this time, we can still use these results to help us understand cancer biology,” she adds.

Previous studies have shown that immunotherapy drugs may work best in cancers with high mutation burdens that rapidly fuel an assembly line of abnormal proteins on the surface of cancer cells and draw the attention of immune system’s T cells. Topalian says this phenomenon may be occurring in the group of patients with non-virus associated Merkel cell cancers, which mutate at rates approximately 100-fold higher than virus-linked cancers. Yet, she says, the low mutation rate in virus-associated Merkel cell cancers may not be a stumbling block in attracting immune system cells, since these cancers typically express viral proteins (antigens) that are magnets for T cells.

Johns Hopkins scientists are continuing to study precisely how T cells interact with cancer cells. Johns Hopkins scientist Janis Taube, M.D., for example, is using a new technology called multispectral immunohistochemistry to outline the geography of immunological events inside a tumor before and after treatment with checkpoint-blocking drugs. The technology also allows scientists to map the expression of multiple proteins on individual cells, compared with traditional single-protein tracking methods.

“We’re learning that tumor architecture is important to understanding the immune response in cancer,” says Topalian.

Pembrolizumab is being developed and manufactured by Merck. The drug and funding for the study described in this publication were provided by Merck. Sharfman is a paid consultant for Merck. Lipson is a paid consultant and speaker for Merck. These arrangements have been reviewed and approved by The Johns Hopkins University in accordance with its conflict of interest policies.

Paul Nghiem, M.D., Ph.D., affiliate investigator of the Clinical Research Division at Fred Hutchinson Cancer Research Center in Seattle, and professor of medicine, Division of Dermatology at the University of Washington School of Medicine, is co-corresponding author.