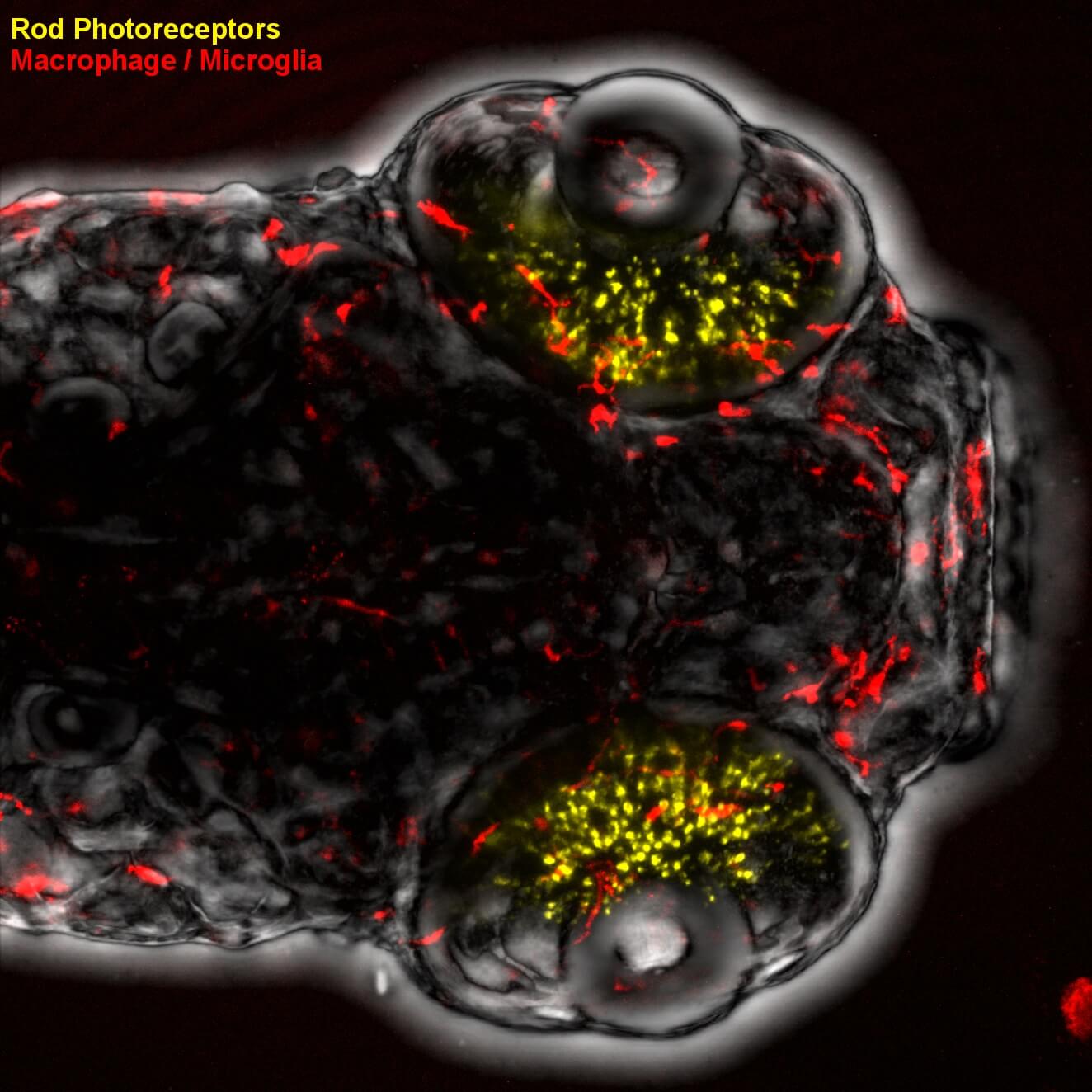 Researchers at Johns Hopkins Medicine report evidence that zebrafishes’ natural ability to regenerate their eyes’ retinal tissue can be accelerated by controlling the fishes’ immune systems. Because evolution likely conserved this mechanism of regenerative potential in other animals, the new findings may one day advance efforts to combat degenerative eye disease damage in humans.

In a report on their experiments, published April 2017 in the Proceedings of The National Academy of Sciences, the researchers say they found evidence that microglia, a cell type found in most vertebrae innate immune systems, affect the Müller glia’s regenerative response and can be harnessed to accelerate the growth of new tissue in the retina.

For the study, researchers created a model of the human degenerative retinal disease, retinitis pigmentosa, in zebrafish by incorporating a gene for a specialized enzyme into the rod cells of the fish retina. The enzyme has the novel ability to convert a chemical, metronidazole, into a toxin, which allows researchers to selectively kill the cells expressing it.

After initiating photoreceptor loss in the fish retinas, the researchers monitored the immune system’s response by tracking the activity of three types of fluorescently labeled immune cells in and around the eye: neutrophils, microglia and peripheral macrophages. They were able to follow the activity of the immune cells using time-lapse 3-D microscopy imaging of fish retinas and found that neutrophils, the type of immune cells that are typically the first responders to tissue injury, were largely unresponsive to photoreceptor death.

They also observed that the peripheral macrophages sensed the injury, but were unable to penetrate the blood-retinal barrier to access the dying cells. Microglia were the only cells the researchers saw that were able to both respond to the injury and reach the injured cells.

“We could see the peripheral macrophages wanted to do something, but could not gain access. Neutrophils didn’t even detect that something had happened, but the microglia were at the right place at the right time,” says Mumm.

Building on the evidence that microglia were in play during injury, the researchers conducted tests in zebrafish with the specialized enzyme incorporated into both rod cells and microglial cells, removing both cell types to ask what role microglia play during regeneration. They found that when microglia were also lost, Müller glia showed almost no regenerative activity after three days of recovery, compared with approximately 75 percent regeneration in the control population.

They then used an anti-inflammatory drug, dexamethasone to see if they could speed up regeneration in the zebrafish retinal tissue. Microglia, Mumm explains, come in two forms—M1, which is associated with inflammation; and M2, which is associated with repair. The researchers believed that by triggering the microglia to transition from phase 1 to phase 2 more quickly by using the drug, they could improve the zebrafishes’ regenerative capabilities.

After using the enzyme to cause rod cell death in the fish, the researchers added the anti-inflammatory drug to the water to reduce microglia reactivity. The researchers saw a 30 percent increase in retinal regeneration at day 4 of recovery compared with controls.

The researchers hope that by harnessing the ability to improve regeneration in zebrafish, they can better understand how to induce regeneration in human eyes, which share many of the same mechanisms for controlling regenerative potential.

“Humans have an evolutionary block on our ability to regenerate certain tissues,” says Mumm. “But humans still have the genetic machinery needed to regenerate retinal tissue, if we can activate and control it.”

Mumm cautions that his team was only able to fluorescently mark three types of immune cells. “There may be other innate immune cells involved in this process that we weren’t able to observe,” says David White, Ph.D., research fellow at the Johns Hopkins University School of Medicine. In the future, the researchers hope to improve their imaging techniques to build a more comprehensive understanding of how immune cells impact the regeneration process.

Funding for this research came from the National Eye Institute (R01EY022810) and the National Center for Advancing Translational Sciences (R41TR000945).

The value of Luminomics’ products could be impacted by the outcome of this study. Dr. Mumm is a founder of Luminomics. Also, Dr. Mumm's spouse, Dr. Meera Saxena, owns shares of Luminomics' stock. This arrangement has been reviewed and approved by the Johns Hopkins University in accordance with its conflict of interest policies.