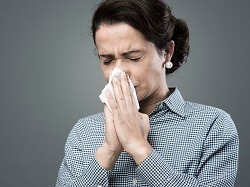 In an effort to identify a simple, reliable way to track the course of nasal polyps in chronic sinus disease, Johns Hopkins Medicine researchers say they’ve linked rising levels of immune system white blood cells, called eosinophils, with regrowth of polyps removed by surgery. The findings, they say, reported online in the May 13 International Forum of Allergy & Rhinology, could lead to the development of a simple blood test to screen for early growth of polyps in sinus disease, track disease progression, and develop and monitor treatments for a common, often troublesome condition, called chronic rhinosinusitis with nasal polyposis.

“Unlike other airway diseases, like asthma, doctors don’t have a single test or biomarker for detecting and tracking sinus-related diseases,” says Jean Kim, M.D., Ph.D., associate professor of otolaryngology–head and neck surgery at the Johns Hopkins University School of Medicine. “A simple blood test would provide an additional way to monitor disease progression, in addition to endoscopies and CT scans for people with symptoms that may enable the ability to screen for sinus disease with nasal polyposis at a primary care facility.”

Ultimately, she says, a specialist would need to confirm the presence of nasal and sinus polyps using a nasal endoscopy and/or CT scan. Kim cautions that the new research, conducted with a small number of patients, does not determine whether rising numbers of eosinophils can actually predict the size of nasal polyps.

An estimated 29 million people in the U.S. suffer from chronic rhinosinusitis, a chronic state of inflammation and swelling of the sinus and nasal passages, which normally conduct air flow and fluids. Over time, a subset of patients will develop teardrop-shaped growths of unhealthy sinus and nasal tissue, called polyps, in the passages, leading to severe inflammation, congestion, drippy postnasal discharge and excessive mucus. Oftentimes, this will lead to worsening of asthma or asthmalike symptoms.

Physicians may recommend removing polyps to ease breathing, but the polyps often grow back. The ability to detect regrowth by a blood test would facilitate diagnosis for these patients.

For the study, Kim and her team studied 61 male and female patients ages 18 to 77 with chronic sinusitis and nasal polyps who were scheduled to have surgery to remove the polyps. Fifty-eight of the patients also had asthma.

The investigators took blood samples and analyzed CT scans from patients prior to surgery. Then, these patients were followed after surgery with another blood sample and nasal endoscopy, which uses a scope to directly view the polyps in the nose. Nasal polyp size was measured and determined by nasal endoscopy.

The patients were then followed after surgery with additional blood tests and nasal endoscopies over the course of three to 12 months to see if the polyps regrew.

Nasal polyps contain several biological components associated with inflammation, including eosinophils, mast cells and immunoglobin proteins. Because eosinophils increase inflammation and collect in the airway of people with asthma, the researchers focused on whether eosinophil levels outside of the polyps in the circulating blood tracked with the growth of nasal polyps.

Using the blood samples, the researchers measured, on average, 807 eosinophils per cubic millimeter in patients before their sinus surgery, a level that dropped to an average of 200 one to two months after the polyps were removed. Over the next nine months, the physicians observed the eosinophils rise again to a high average of 338, presumably due to the regrowth of the nasal polyps. Kim cautions that the number of eosinophils from one patient to another can vary greatly and that the absolute number isn’t so important, but the change in levels with respect to the presence of polyps is key.

Nasal polyp size was measure and determined by a 4-point scale for each nostril after endoscopy: 0 for no polyp and 4 for complete obstruction. Each person could thus have a maximum score of 8 if both nostrils were completely blocked by polyps. Prior to surgery, the patients had an average score of 5, which dropped to 0.1 one to two months after surgery. From three to 12 months following surgery, the average score rose to 1.5.

“The rising levels of eosinophils tracked closely with the regrowth of the polyps,” says Kim. “However, we still need more studies to further determine if eosinophils levels will be a reliable predictor of actual polyp size in the regrowth process.” Kim says it is unknown whether the presence of eosinophils causes the polyps to regrow or if they are simply a byproduct of inflammation. More studies are needed to specifically address the cause-effect relationship between eosinophils and nasal polyps.

The study was funded by the Flight Attendant Medical Research Institute.