If Your Systolic Stinks, "Rotten Egg" Gas May Be Why 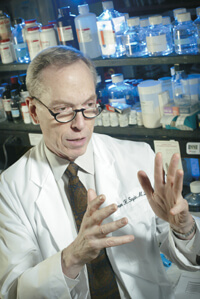 Anyone with a nose knows the rotten-egg odor of hydrogen sulfide, a gas generated by bacteria living in the human colon. Now an international team of scientists has discovered that cells inside the blood vessels of mice — as well as in people, no doubt — naturally make the gassy stuff, and that it controls blood pressure.

Having discovered that hydrogen sulfide, or H2S, is produced in the thin, endothelial lining of blood vessels, the researchers, including scientists from Johns Hopkins, report today in Science that H2S regulates blood pressure by relaxing blood vessels. As the newest member of a family of so-called gasotransmitters, this messenger molecule is akin in function, if not form, to chemical signals like nitric oxide, dopamine and acetylcholine that relay signals between nerve cells and excite or put the brakes on mind-brain activities.

“Now that we know hydrogen sulfide’s role in regulating blood pressure, it may be possible to design drug therapies that enhance its formation as an alternative to the current methods of treatment for hypertension,” says Johns Hopkins neuroscientist Solomon H. Snyder, M.D., a co-author of the paper.

Conducting their investigations using mice missing a gene for an enzyme known as CSE, long suspected as responsible for making H2S, the researchers first measured hydrogen sulfide levels in a variety of tissues in the CSE-deficient mice and compared them to normal mice. They found that the gas was largely depleted in the cardiovascular systems of the altered mice, engineered by Rui Wang, M.D., Ph.D., of Lakehead University in Ontario, and Lingyun Wu, M.D., Ph.D., of the University of Saskatchewan, Canada. By contrast, normal mice had higher levels — clear evidence that hydrogen sulfide is normally made by mammalian tissues using CSE.

Next, the scientists applied tiny cuffs to the tails of the mice and measured their blood pressure, noting spikes of about 20 percent, comparable to serious hypertension in humans.

Finally, the team tested how blood vessels of CSE-deficient mice responded to the chemical neurotransmitter methacholine, known to relax normal blood vessels. The blood vessels of the altered mice relaxed hardly at all, indicating that hydrogen sulfide was largely responsible for relaxation.

Because gasotransmitters are highly conserved in mammals, the findings of the research are believed to have broad applications to human physiology and disease.

“In terms of relaxing blood vessels, it looks like hydrogen sulfide might be as important as nitric oxide,” Snyder says, referring to the first gasotransmitter that two decades ago was discovered to regulate blood pressure.

Just because these two gas molecules perform similar functions, doesn’t mean they’re redundant, says Wang, the paper’s principal author. “Nature has added on layer upon layer of complexity to provide a better and tighter control of body function — in this case, of blood pressure.”

Studying gaseous messengers can be tricky, explains Snyder, an authority on nitric oxide (NO) whose lab in 1990 discovered that the enzyme triggering NO production is activated by a protein mechanism known as calcium-calmodulin.

“When a nerve fires, it releases a bit of neurotransmitter. Then it fires again, very quickly, and releases more of the neurotransmitter, which is always in reserve and at the ready in large storage pools called vesicles. However, gasses can’t be stored; they diffuse. So every time there’s a nerve impulse, an enzyme must be activated to make it,” he says.”

Although CSE, the enzyme that activates hydrogen sulfide, was characterized more than half a century ago, the new work is the first to reveal that it is activated in the same way as the nitric oxide-forming enzyme, thus establishing how hydrogen sulfide regulates blood pressure by relaxing blood vessels.

“It’s difficult to overestimate the biological importance of hydrogen sulfide or its implications in hypertension as well as diabetes and neurodegenerative diseases,” Wang says. “In fact, most human diseases probably have something to do with gasotransmitters.”

The research was supported by grants from the U.S. Public Health Service and the Canadian Institutes of Health Research as well as a Research Scientist Award.