Humans Probably Not Alone in How We Perceive Melodic Pitch 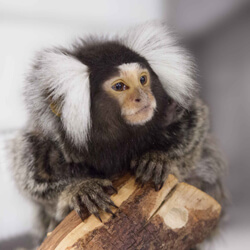 The specialized human ability to perceive the sound quality known as “pitch” can no longer be listed as unique to humans. Researchers at Johns Hopkins report new behavioral evidence that marmosets, ancient monkeys, appear to use auditory cues similar to humans to distinguish between low and high notes. The discovery infers that aspects of pitch perception may have evolved more than 40 million years ago to enable vocal communication and songlike vocalizations.

A summary of the research was published online in the journal Proceedings of the National Academy of Sciences on Dec. 28.

“Pitch perception is essential to our ability to communicate and make music,” says Xiaoqin Wang, Ph.D., a professor of biomedical engineering at the Johns Hopkins University School of Medicine, “but until now, we didn’t think any animal species, including monkeys, perceived it the way we do. Now we know that marmosets, and likely other primate ancestors, do.”

Marmosets are small monkeys native to South America that are highly vocal and social. Wang, an auditory neuroscientist and biomedical engineer, has been studying their hearing and vocalizations for the past 20 years. A decade ago, he says, he and his team of researchers identified a region in the marmoset brain that appears to process pitch. Nerve cells in that region, on the edge of the primary auditory cortex, only “fired” after marmosets were exposed to sounds with pitch, like the shifting in high and low notes associated with a melody, not those without, such as noise. Human brains show similar activity in that region, as other researchers have reported, he notes.

What was missing was behavioral evidence that the marmosets could perceive and respond to differences in pitch the way humans do, and Wang’s laboratory group spent years developing behavioral tests and electrophysiological devices designed to monitor subtle changes in the monkeys’ neural activity. Part of their work was to train a group of marmosets to lick a waterspout only after hearing a change in pitch.

Wang says that other animal species have been reported to show pitch perception, but none have shown the three specialized features of human pitch perception. First, people are better at distinguishing pitch differences at low frequencies than high. For example, people who hear tones of 100, 200, 300 and 400 hertz played simultaneously hear four separate sounds, but they hear only one sound when tones of 1,100, 1,200, 1,300 and 1,400 hertz are played together, even though the frequency intervals are the same in both cases.

Second, humans are able to pick up on subtle changes in the spread between pitches at low frequencies or hertz, so they notice if a series of tones is increasing by 100 hertz each time and then introduces a tone only 90 hertz higher.

And third, at high frequencies, peoples’ ability to perceive pitch differences among tones played simultaneously is related to how sensitive they are to the rhythm, or timed fluctuations, of sound waves.

Through a series of hearing tests, with waterspout licks as a readout, Wang’s team, led by graduate student Xindong Song, determined that marmosets share all three features with humans, suggesting that human components of pitch perception evolved much earlier than previously thought.

The American continent, with its marmosets in place, broke away from the African land mass approximately 40 million years ago, before humans appeared in Africa, so it’s possible that this humanlike pitch perception evolved before that break and was maintained throughout primate evolution in Africa until it was inherited by modern humans. Another possibility is that only certain aspects of pitch perception were in place before the split, with the rest of the mechanisms evolving in parallel in Old and New World monkeys. According to Wang, more stringent tests are needed to determine whether existing Old World monkeys perceive pitch like humans do.

“In addition to the evolutionary implications of this discovery, I’m looking forward to what we will be able to learn about human pitch perception now that we have a primate relative we can study behaviorally and physiologically,” says Wang. “Now we can explore questions about what goes wrong in people who are tone deaf and whether perfect pitch is an inherited or learned trait.”

Other authors of the report include Michael Osmanski and Yueqi Guo of the Department of Biomedical Engineering at the Johns Hopkins University School of Medicine.

This work was supported by grants from the National Institute on Deafness and Other Communication Disorders (DC003180, DC013150).

The photo and audio files that accompany this story are available for download.

We are providing these resources with the understanding that they will be used only to help illustrate the story in the corresponding news release. Please use the credit information provided. If there is anything else you need, please email us at JHMedia@jhmi.edu. Thank you.