How the Retina Marches to the Beat of Its Own Drum

One of many light-sensitive pigments was found to set the retina’s own biological tempo while others set the body’s master clock.
Release Date: September 29, 2015 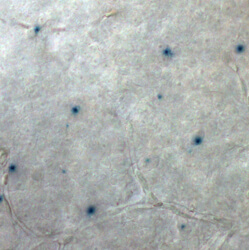 Neuropsin, blue, was found in nerve cells in the retina of a genetically engineered mouse.
Wendy Yue, Johns Hopkins Medicine

Researchers at Johns Hopkins and the University of Washington report new research that sheds light on how the retina sets its own biological rhythm using a novel light-sensitive pigment, called neuropsin, found in nerve cells at the back of the eye.

“No one knew what neuropsin actually did,” says King-Wai Yau, Ph.D., a professor of neuroscience at Johns Hopkins School of Medicine. “We only knew it existed in the mammalian genome and may help set the timing of reproduction for some birds. Now we think we know what it does in mammals.” The new study, described in a report online on Sept. 21 of the journal Proceedings of the National Academy of Sciences, ushers in a more complex view of the retina, according to Zheng Jiang, Ph.D., a postdoctoral fellow and one of the authors of the paper.

Neuropsin is one of seven related “opsin” proteins in mammals. Four enable the rod and cone cells of the retina to absorb light of different wavelengths and transmit that information to the brain so that the eye can see images. Another opsin, melanopsin, also absorbs light but uses it to guide processes like pupil constriction and circadian rhythms. It is found in nerve cells that connect the retina to the body’s master clock, the suprachiasmatic nuclei of the brain. On its own, this master clock tends to run slower than 24 hours in humans, and faster than 24 hours in mice, so it needs to be constantly reset to the light/dark environment by signals from the retina.

Yau explains that nearly every tissue in the body also has a local molecular “clock” for regulating patterns of activity, but most of them cannot be reset to light on their own. Instead, all but one of these molecular clocks are synchronized by the master clock within the brain — the exception being the retina, which maintains its own rhythms while sending the master clock the signals it needs to set the light-dark activity tempo for the rest of the body.

In previous work, Yau’s collaborator, Russell van Gelder, M.D., Ph.D., a professor of ophthalmology at the University of Washington, studied the circadian rhythms of genetically tweaked mice that were missing rod and cone cells and melanopsin. As expected, the circadian rhythms of these mice continued cycling but could no longer adapt to changes in light exposure. Surprisingly, though, the activity patterns of the retinas were still responsive to light changes, suggesting that there was another pigment in play.

“The retina is the only tissue known to ignore the master clock, but it does keep itself on a schedule, so we wanted to know how,” says Wendy Yue, a graduate student in Yau’s laboratory who worked on the project.

Suspecting one of the two opsin proteins with unknown functions, Yau's team created two more types of mice, each one missing one of the opsin genes. The retinas of mice without opsin 3 continued to be light-sensitive but their activity patterns were less robust. However, even with intact rods, cones and melanopsin, the retinas of the mice without neuropsin lost their ability to adapt to new patterns of light and darkness.

By repeating their experiments with different wavelengths of light, the team found that neuropsin responds to UV-A and violet light. “That means that the retina uses separate light signals to set its own clock and that of the body’s master clock, the latter of which is set based on the blue/green light absorbed by melanopsin as well as blue through red light absorbed by the rods and cones,” says Yau.

Next the team used a specialized “locator gene,” called a reporter gene, to figure out where neuropsin does its work. They found that, like melanopsin, it is located in neural cells that connect the retina to the brain, though where these particular cells go within the brain remains uncertain. Mysteriously, the researchers say, they also found it in the cornea, which was not thought to contain any pigments, since its job is to let light through to the rest of the eye.

“There is a lot of work left to do,” says Xiaozhi Ren, Ph.D., a postdoctoral fellow in Yau’s laboratory. “For example, we don’t know what kind of signals — chemical or electrical — neuropsin uses to set the retina’s clock.” Yau says they also want to investigate what role opsin 3 plays.

Other authors of the report include Hsi-Wen Rock Liao and Randall Reed of the Johns Hopkins University School of Medicine; Ethan Buhr of the University of Washington Medical School; and Xue Mei, Shruti Vemaraju, Minh-Thanh Nguyen and Richard Lang of Cincinnati Children’s Hospital Medical Center.