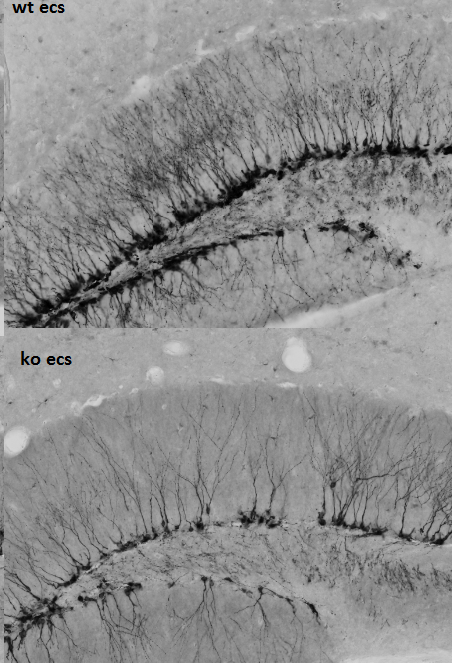 New brain cells develop in the brain’s hippocampus after electroconvulsive therapy in a healthy mouse (top) and a mouse lacking the protein Narp (bottom). The new cells from the Narp-less mice have fewer branching dendrites, needed for communication with nearby brain cells, than the healthy mice do.
Credit: Irving Reti laboratory

In a study using genetically engineered mice, Johns Hopkins researchers have uncovered some new molecular details that appear to explain how electroconvulsive therapy (ECT) rapidly relieves severe depression in mammals, presumably including people. The molecular changes allow more communication between neurons in a specific part of the brain also known to respond to antidepressant drugs.

In a report of their study, published online on Oct. 20 in Neuropsychopharmacology, the researchers say the findings should help advance the development of treatments that do what ECT does without the risks and side effects.

“ECT is the most effective treatment available for severe and treatment-resistant depression, but it requires anesthesia and can cause side effects like memory loss,” says Irving Michael Reti, M.B.B.S., M.D., director of the Brain Stimulation Program and associate professor of psychiatry and behavioral sciences at the Johns Hopkins University School of Medicine. “Figuring out how exactly ECT works on the brain is key to finding better alternatives.”

The new study extends work by Reti and his colleagues, whose research has focused recently on a gene in the mouse brain’s hippocampus that makes the protein Narp, shown to be linked to addiction and so-called “motivated behaviors” more than a decade ago, while Reti was working with Jay Baraban at Johns Hopkins.

ECT, given to depressed patients under anesthesia and after taking a muscle relaxer, sends electrical pulses to the brain through electrodes applied to the head. The electrical stimulation triggers a seizure. Repeated a few times a week for a short period, ECT eliminates depressive symptoms for an extended time in many patients.

Working with mice, Reti and others have shown previously that within a few minutes of ECT, certain genes notably including Narp are turned on in the hippocampus, a small, seahorse-shaped part of the brain in the temporal lobe that helps regulate emotions.

For the new study exploring Narp’s role in ECT, the researchers used healthy mice and mice genetically bred to lack the Narp.

Mice in both groups underwent ECT for five sessions delivered through ear clip electrodes. Separately, both types of mice got “sham” procedures without the electrical pulse as controls. Each ECT session delivered a 0.5 millisecond electrical pulse for 1 second, with a frequency of 100 Hertz and 40 milliamp current about 5 percent of the total electrical charge given to a human patient.

A depressed mouse will spend more time floating similar to giving up on active swimming than a non-depressed mouse. In a six-minute test, healthy mice spent about 50 seconds of the last four minutes floating, whereas the mice without Narp spent about 80 seconds floating in this time frame.

The researchers say the results show that Narp is a specific target needed for ECT’s impact as an antidepressant.

In both healthy mice and mice without Narp, ECT turned on the gene c-Fos known to turn on still more genes activated by ECT within an hour after the final ECT session.

It was already known that a few weeks after an ECT procedure or after taking an effective antidepressant that stem cells in the hippocampus turn on and make more copies of hippocampal neurons.

To see if Narp played a role in making these new cells in mice, the researchers injected a synthetic molecule, BrdU, to label and allow detection of newly created cells that would become neurons in the hippocampus. Both the healthy mice and the mice without Narp had three times the number of new cells in the hippocampus after ECT than the mice that were given the sham procedure.

The researchers also looked at the dendrites growing out of these new brain cells, projections that reach out and communicate with neighboring cells. They visualized the dendrites by staining them for the protein DCX, which binds to the cell’s skeleton. Some 24 hours after the last ECT session in both healthy mice and mice lacking Narp, they found that new cells in the mice lacking Narp had far fewer branches on their dendrites than cells found in the healthy mice’s hippocampus.

“What all of this tells us is that Narp seems to regulate communication with other neurons by forming new synapses, or connections, and this may be the way that, in part, it enacts its antidepressive effects following ECT,” says Reti.

“What this suggests is that losing Narp doesn’t affect the response to the ketamine, meaning the antidepressant could be acting through a different mechanism than ECT suggesting that there may be multiple ways to treat depression, including unknown pathways that use ECT’s mechanism,” says Reti.

COI: Reti and Vaidya received free supplies from Neuronetics, Inc. Reti is part of a TMS clinical trial with Brainsway, Inc. and the U.S. Department of Defense.