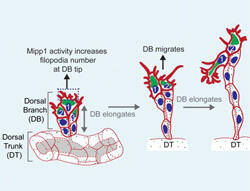 A schematic of the elongation of dorsal branches in the developing fruit fly trachea.
Courtesy Cell Press

Fruit fly windpipes are much more like human blood vessels than the entryway to human lungs. To create that intricate network, fly embryonic cells must sprout “fingers” and crawl into place. Now researchers at The Johns Hopkins University have discovered that a protein called Mipp1 is key to cells’ ability to grow these fingers.

A summary of the research, which has implications for understanding normal and abnormal development of human and other animal tissues, was published online on Nov. 25 in the journal Cell Reports.

“Fruit flies don’t have blood to bring oxygen to their cells,” says Deborah Andrew, Ph.D., professor of cell biology at the Johns Hopkins University School of Medicine. “Instead, the tubes of the windpipe, or trachea, branch out repeatedly, getting thinner and thinner — like the tiny capillary blood vessels throughout our bodies — so that oxygen can diffuse directly from the trachea to nearby tissue.”

Fruit flies are a research animal favorite among biologists because their genes and chemistry are relatively easy to manipulate, and because they can be easily and quickly bred. And since evolution highly conserves key biological events, what is learned in flies can shed light on the development of many species, including humans, Andrew notes.

Andrew says two major ducts of the embryonic fruit fly trachea run parallel to each other along the length of the embryo. From these wide “dorsal trunks,” several thinner branches split off and grow toward the top of the embryo until they meet and merge in the middle, forming a contiguous network.

Before and after elongating, the dorsal branches are just six interconnected cells. They start off stacked three high and wrapped around the thin tube connected to the dorsal trunk. In order to elongate the tube, the cells at the top grow fingerlike structures called filopodia that reach out and pull the cells away from the dorsal trunk. At the same time, the cells rearrange themselves to form a structure six cells high.

“A few years ago, we discovered that in developing fly embryos, the protein Mipp1 is controlled by the master regulator gene that orchestrates all of tracheal development,” says Yim Ling Cheng, Ph.D., a cell biology postdoctoral fellow at the Johns Hopkins University School of Medicine and the primary author of the paper. At that point, the researchers knew that Mipp1 was an enzyme responsible for turning the molecule IP6 into IP3 ¬— two different chemical messengers — by breaking off three phosphate groups. They wanted to know why Mipp1 was in the trachea.

By tracking its location in the trachea, they found that, at first, the protein is located throughout the developing tissue. But it soon becomes concentrated in the top pair of cells in the three-cell-high dorsal branches that are about to elongate. Those are the cells that grow filopodia, and when there was too much Mipp1, the research team saw too many filopodia. Too little Mipp1 resulted in too few filopodia and branches that were slow to elongate.

Wondering if Mipp1’s presence in the top cells was the cause or a result of the cells’ position, the researchers genetically manipulated the flies so that the dorsal branch cells would turn on the Mipp1 gene at random. They expected Mipp1 to then be found in the six positions of the branch at random, but instead they found that in the top two cells, it was present more than three times as frequently as in other cells. That suggests, says Andrew, that Mipp1 makes cells more likely to climb to the top, where they are needed to elongate the branches.

The team learned from further experiments that Mipp1 decorates the outside edge — not the interiors — of the top cells in the tracheal branches, where it converts IP6 into IP3, but they wonder how exactly that influences finger growth. They hope to find out in their ongoing experiments.

This work was supported by grants from the National Institute of Dental and Craniofacial Research (RO1 DE012873, F31 DE021285).