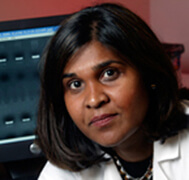 A team of researchers from Johns Hopkins Children’s Center, the University of Mississippi Medical Center and the University of Massachusetts Medical School describe the first case of a so-called “functional cure” in an HIV-infected infant. The finding, the investigators say, may help pave the way to eliminating HIV infection in children.

A report on the case is being presented on Sunday, March 3, at the 20th Conference on Retroviruses and Opportunistic Infections (CROI) in Atlanta. Johns Hopkins Children’s Center virologist Deborah Persaud, M.D., lead author on the report, and University of Massachusetts Medical School immunologist Katherine Luzuriaga, M.D., headed a team of laboratory investigators. Pediatric HIV specialist Hannah Gay, M.D., associate professor of pediatrics at the University of Mississippi Medical Center provided treatment to the baby.

The infant described in the report underwent remission of HIV infection after receiving antiretroviral therapy (ART) within 30 hours of birth. The investigators say the prompt administration of antiviral treatment likely led to this infant’s cure by halting the formation of hard-to-treat viral reservoirs — dormant cells responsible for reigniting the infection in most HIV patients within weeks of stopping therapy.

“Prompt antiviral therapy in newborns that begins within days of exposure may help infants clear the virus and achieve long-term remission without lifelong treatment by preventing such viral hideouts from forming in the first place,” Persaud says.

The researchers say they believe this is precisely what happened in the child described in the report. That infant is now deemed “functionally cured,” a condition that occurs when a patient achieves and maintains long-term viral remission without lifelong treatment and standard clinical tests fail to detect HIV replication in the blood.

In contrast to a sterilizing cure — a complete eradication of all viral traces from the body — a functional cure occurs when viral presence is so minimal, it remains undetectable by standard clinical tests, yet discernible by ultrasensitive methods.

The child described in the current report was born to an HIV-infected mother and received combination antiretroviral treatment beginning 30 hours after birth. A series of tests showed progressively diminishing viral presence in the infant’s blood, until it reached undetectable levels 29 days after birth. The infant remained on antivirals until 18 months of age, at which point the child was lost to follow-up for a while and, the researchers say, stopped treatment. Ten months after discontinuation of treatment, the child underwent repeated standard blood tests, none of which detected HIV presence in the blood. Using ultra-sensitive viral RNA and DNA tests, the researchers detected a few viral traces. However, tests for HIV-specific antibodies — the standard clinical indicator of HIV infection — remained negative throughout.

Currently, high-risk newborns — those born to mothers with poorly controlled infections or whose mothers’ HIV status is discovered around the time of delivery — receive a combination  of antivirals at prophylactic doses to prevent infection for six weeks and start therapeutic doses if and once infection is diagnosed. But this particular case, the investigators say, may change the current practice because it highlights the curative potential of very early ART.

Specialists say natural viral suppression without treatment is an exceedingly rare phenomenon observed in less than half a percent of HIV-infected adults, known as “elite controllers,” whose immune systems are able to rein in viral replication and keep the virus at clinically undetectable levels. HIV experts have long sought a way to help all HIV patients achieve elite-controller status. The new case, the researchers say, may be that long-sought game-changer because it suggests prompt ART in newborns can do just that.

The investigators caution they don’t have enough data to recommend change right now to the current practice of treating high-risk infants with prophylactic, rather than therapeutic, doses but the infant’s case provides the rationale to start proof-of-principle studies in all high-risk newborns.

“Our next step is to find out if this is a highly unusual response to very early antiretroviral therapy or something we can actually replicate in other high-risk newborns,” says Persaud, who is also the scientific chair of the HIV Cure Committee of the International Maternal, Pediatric Adolescent AIDS Clinical (IMPAACT) network, a consortium of researchers and institutions that was critical in spearheading the earliest clinical trials of mother-to-child transmission and early treatment of infants 15 years ago.

A single case of sterilizing cure has been reported so far, the investigators note. It occurred in an HIV-positive man treated with a bone marrow transplant for leukemia. The bone marrow cells came from a donor with a rare genetic mutation of the white blood cells that renders some people resistant to HIV, a benefit that transferred to the recipient. Such a complex treatment approach, however, HIV experts agree, is neither feasible nor practical for the 33 million people worldwide infected with HIV.

“Complete viral eradication on a large scale is our long-term goal but, for now, remains out of reach, and our best chance may come from aggressive, timely and precisely targeted use of antiviral therapies in high-risk newborns as a way to achieve functional cure,” Luzuriaga says.

Despite the promise this approach holds for infected newborns, the researchers say preventing mother-to-child transmission remains the primary goal.

“Prevention really is the best cure, and we already have proven strategies that can prevent 98 percent of newborn infections by identifying and treating HIV-positive pregnant women,” says Gay, the HIV expert who treated the infant.

The work was supported by the National Institutes of Health, by amfAR, the Foundation for AIDS Research and by the Department of Health and Human Services.

Founded in 1912 as the children's hospital of the Johns Hopkins Medical Institutions, the Johns Hopkins Children's Center offers one of the most comprehensive pediatric medical programs in the country, with nearly 95,000 patient visits and some 9,000 admissions each year. Hopkins Children’s is consistently ranked among the top children's hospitals in the nation. Hopkins Children’s is Maryland's largest children’s hospital and the only state-designated Trauma Service and Burn Unit for pediatric patients. It has recognized Centers of Excellence in dozens of pediatric subspecialties, including allergy, cardiology, cystic fibrosis, gastroenterology, nephrology, neurology, neurosurgery, oncology, pulmonary, and transplant. For more information, visit www.hopkinschildrens.org.
Return to Top