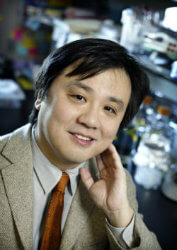 Akira Sawa, M.D., Ph.D., a professor in the Department of Psychiatry and Behavioral Sciences and director of the Johns Hopkins Schizophrenia Center, has been named the inaugural Sachiko Kuno and Ryuji Ueno Innovation Professor, endowed by scientists, biotech entrepreneurs and philanthropists Ryuji Ueno and Sachiko Kuno. The dedication and installation ceremony took place Nov. 24 in the Henry Phipps Building at The Johns Hopkins Hospital.

“The Sachiko Kuno and Ryuji Ueno professorship places the Schizophrenia Center on a firm foundation, in ways that will benefit everyone doing research there,” Sawa says. “On a personal level, I deeply appreciate the fact that Drs. Kuno and Ueno have given me an opportunity to play a leadership role in schizophrenia, general psychiatry and global medicine.”

After completing his residency in psychiatry and clinical fellowship at the University of Tokyo Hospital in Japan, Sawa joined Johns Hopkins University as a postdoctoral fellow under Dr. Solomon Snyder in 1996. He joined the Department of Psychiatry and Behavioral Sciences in 2001. In 2011, he was appointed director of the Schizophrenia Center.

Sawa has been recognized internationally throughout his career as an outstanding leader in the field of brain sciences. In 2002, he received the Ueno Award for outstanding promise in science. A discovery related to schizophrenia by his research team was named among the top five greatest discoveries in 2005 by Science magazine. In 2007, he received the Efron  Award from the American College of Neuropsychopharmacology, for outstanding basic research contributions to neuropsychopharmacology.

He also has led a series of studies that advanced the understanding of the development of schizophrenia, mood disorders and other major mental illnesses. He now intends to focus on advances in patient care at the Schizophrenia Center — which provides clinical care and public outreach for people with schizophrenia and related conditions — and to mentoring young physician scientists.


About Sachiko Kuno and Ryuji Ueno