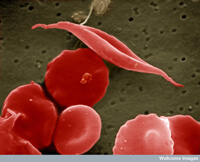 In a preliminary clinical trial, investigators at Johns Hopkins have shown that even partially-matched bone marrow transplants can eliminate sickle cell disease in some patients, ridding them of painful and debilitating symptoms, and the need for a lifetime of pain medications and blood transfusions.  The researchers say the use of such marrow could potentially help make bone marrow transplants accessible to a majority of sickle cell patients who need them.

After a median follow-up of two years, the transplants successfully eliminated sickle cell disease in 11 of 17 patients.  Three were fully matched to their donors and eight received half-matched donor marrow.  All 11 patients are free of painful sickle cell crises and 10 no longer have anemia.  There were no deaths and no unexpected toxicities.

Six of the 11 patients (all half-matched) have stopped taking immunosuppressive drugs, although some still require narcotics for chronic pain because of sickle cell-related organ damage.  Blood tests on the six patients show that their red cells are now completely derived from their donor’s marrow.

Patients with severe sickle cell disease (SCD) face shortened life spans, intractable pain and eventual organ damage as a result of their disease, an inherited disorder caused by a mistake in the oxygen-carrying hemoglobin molecules in red blood cells.  The flawed genetic code stiffens red cells, and shapes them into a pronged “sickle” that clump and stick into blood vessel walls, cutting off blood and oxygen to tissues and organs throughout the body.

SCD occurs in approximately one in 400 African Americans, and rarely in Caucasians. An estimated 100,000 people are currently living with sickle cell disease in the U.S.
Most patients die before age 50, and many suffer poor quality of life with frequent episodes of “off-the-charts” pain, and an increased risk for kidney failure, stroke, deep-vein thrombosis, and lung disease.

Treatments include blood transfusions and a drug, hydroxyurea.  Many patients use narcotics to control severe pain and have repeat hospitalizations. Bone marrow transplants have been successful in curing some cases, but matching donors are rare and the procedure itself poses risk.

In the current study, 17 patients at the Johns Hopkins Hospital were offered bone marrow transplant options, including the use of half-matched donor marrow to try and replace their “sickled” blood cells with new, healthy ones. The transplants were successful in 11 of the patients, of whom eight were only half-matches. Results of the trial were published in the Sept. 6 early online edition of Blood.

“We’re trying to reformat the blood system and give patients new blood cells to replace the diseased ones, much like you would replace a computer’s circuitry with an entirely new hard drive,” says Robert Brodsky, M.D., director of the Division of Hematology at Johns Hopkins and The Johns Hopkins Family Professor of Medicine and Oncology. “While bone marrow transplants have long been known to cure sickle cell disease, only a small percentage of patients have fully matched, eligible donors.”

National registries often are of little help in finding donors for sickle cell patients, because most of those in need are African American and other minorities who are vastly underrepresented in registries, say the Johns Hopkins researchers.

To overcome the shortage of donors, investigators at Johns Hopkins developed techniques, recently tested in leukemia and lymphoma patients, to transplant with bone marrow that is half-identical or “haploidentical” to the patient’s tissue type.  Half-matched bone marrow can be obtained from parents, children and most siblings, and is extracted by needle from the hip bone.

For the study, the Johns Hopkins team screened 19 patients to find bone marrow donors with either half-identical or fully matched tissue. Each transplant candidate had experienced many severe pain crises, significant organ problems, or had failed hydroxyruea, the only drug known to curtail sickle cell symptoms.  The team found donors for 17 of the 19 patients: 14 were half-identical and three were fully matched siblings.  The youngest patient was 15; the oldest 46.

After the transplant, all patients received high doses of the chemotherapy drug cyclophosphamide, which kills remaining blood cells, including diseased sickled cells, and preserves the donor’s stem cells responsible for making new, healthy cells.
Of the 17 patients, six transplants were not successful; however, because of the reduced intensity of the conditioning regimen, all of these patients recovered their own blood cells.

There were no deaths, some infections, and only slight skin-related graft versus host disease symptoms in one patient, which cleared without therapy, the researchers reported. Some brain swelling occurred in three patients during the conditioning period and resolved without neurologic damage.

The Johns Hopkins doctors say that while the majority of patients in the trial had successful transplants, about less than half did not.

“Sickle cell disease patients undergo multiple blood transfusions throughout their lives and may have acquired antibodies against many different blood types, making it more difficult than usual to give patients donated bone marrow.” says Javier Bolaños-Meade, M.D., associate professor of oncology at the Johns Hopkins Kimmel Cancer Center and principal investigator of the study.

Improving the rate of engraftment in haploidentical transplants for sickle cell disease remains a challenge, they say, but the researchers are looking for additional ways to overcome it, including increasing the number of stem cells transplanted and using other immunosuppressant drugs during the transplant.

Fuchs, Luznik, Brodsky and Jones are listed as inventors on a patent application regarding the “use of high-dose, post-transplantation oxazaphosphorine drugs for reduction of transplant rejection.” Lanzkron served in a scientific advisory board for Hemaquest.