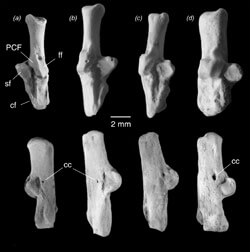 One day last spring, fossil hunter and anatomy professor Kenneth Rose, Ph.D. was displaying the bones of a jackrabbit’s foot as part of a seminar at the Johns Hopkins University School of Medicine when something about the shape of the bones looked oddly familiar.

That unanticipated eureka moment has led researchers at the school to the discovery of the oldest known record of rabbits. The fossil evidence in hand, found in west-central India, predates the oldest previously known rabbits by several million years and extends the record of the whole category of the animal on the Indian subcontinent by 35 million years.

Published online in the February Proceedings of the Royal Society, the investigators say previous fossil and molecular data suggested that rabbits and hares diverged about 35 million years ago from pikas, a mousy looking member of the family Ochotonidae in the order of lagomorphs, which also includes all of the family Leporidae encompassing rabbits and hares.

But the team led by Johns Hopkins’s Rose found that their rabbit bones were very similar in characteristics to previously unreported Chinese rabbit fossils that date to the Middle Eocene epoch, about 48 million years ago. The Indian fossils, dating from about 53 million years ago, appear to show advanced rabbit-like features, according to Rose.

"What we have suggests that diversification among the Lagamorpha group-all modern day hares, rabbits and pikas-may already have started by the Early Eocene," says Rose, professor in the Center for Functional Anatomy and Evolution at the Johns Hopkins University School of Medicine.

Rose says the new discovery was delayed a few years because the researchers had not been looking specifically to determine the age of rabbits. "We found these bones on a dig in India a few years ago and didn’t know what animal they came from, so we held onto them and figured we’d look at them later," he says. "It didn’t occur to us they would be rabbits because there were no known rabbits that early in time and the only known rabbits from that part of the world are from central Asia."

But one day, while using the jackrabbit foot bones as a teaching tool for a class, the shape of the bones in the class struck him as something he’d seen before among his collection of unidentified bones.

Sure enough, the tiny bones about a quarter of an inch long from India looked remarkably similar to ankle and foot bones from modern day jackrabbits, which are 4 to 5 times bigger.

Rose and his team set out and measured every dimension of their Indian bones and compared them to eight living species of rabbits and hares. They also compared them to two species of the related pika-that mouse-like, mountain-dwelling critter that lives in the Rocky Mountains of North America, among other places.

Using a technique called character analysis, the team first recorded measurements of 20 anatomical features of the bones, which showed that the bones are definitely Lagomorph and closer to rabbits than pikas. The scientists then ran a series of statistical tests on the individual measurements to see how they compared with the Chinese fossils as well as living rabbits and pikas. They found that although the Indian fossils resemble pikas in some primitive features, they look more like rabbits in specialized bone features.

Asked how many years of good luck one gets with a 53 million-year-old rabbit foot bone, Rose quipped that he "already got lucky with the feet, but what we really would like are some teeth that tell how different these animals really were."

The research was funded by the National Geographic Society, Department of Science and Technology, Government of India, the Council for Scientific and Industrial Research of India, the Research Foundation Flanders and the Belgian Federal Science Policy Office.

Authors on the paper are Valerie Burke DeLeon and Rose of Hopkins; Pieter Missiaen of University of Ghent, Belgium; R.S. Rana and Lachham Singh of H.N.B. Garhwal University in Uttaranchal, India; Ashok Sahni of Panjab University, India; and Thierry Smith of the Royal Belgian Institute of Natural Sciences in Brussels, Belgium.