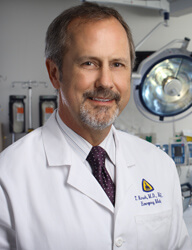 Thomas D. Kirsch, M.D., M.P.H., a Johns Hopkins emergency physician who was among key responders to the Sept. 11 attacks on the New York World Trade Center and the 2010 Haitian earthquake, is the inaugural recipient of a new national award for outstanding achievement and excellence in the field of disaster medicine.

The American College of Emergency Physicians has selected Kirsch, who also is an associate professor at the Johns Hopkins University School of Medicine, as the first recipient of its Disaster Medical Sciences Award, to be presented Oct. 16 at ACEP’s annual scientific assembly conference, being held this year in Seattle. Kirsch has been studying and working in the disaster medicine field for more than 20 years.

“I’m really honored to receive this award,” said Kirsch, who also serves as the director of the Center for Refugee and Disaster Response at the Johns Hopkins Bloomberg School of Public Health — where Kirsch also teaches. “But I think it’s important to note that this award is also a firm recognition that disaster medicine has emerged as an important field of scientific research that can lead to innovations and other changes that ultimately benefit people affected by catastrophic events.”

“Dr. Kirsch is a rare academician who is not only a disaster researcher and educator, but has real-world experience providing individual health care and public health interventions,” said Kelen. “His work is cutting-edge because it’s informed by research and multidisciplinary in nature.”

Kelen noted that Kirsch, who has published many articles about disaster preparedness and response, is no armchair academic, but has been in the thick of a number of major catastrophic events in the United States and abroad.

For example, after the massive earthquake that struck Haiti in January 2010, Kirsch headed up a team of Johns Hopkins physicians, nurses and other medical experts who traveled to the stricken country to provide care and help organize and lead medical teams arriving from around the world. Kirsch also served in the aftermath of the 9/11 attacks in New York City, working with the American Red Cross to coordinate a rapid public health response in areas closest to Ground Zero.

Other major disaster relief and scientific research efforts Kirsch has worked on include:
--Working with the Federal Emergency Management Agency on an assessment of the physical and functional damage to hospitals and health care systems in the areas hardest hit by Hurricane Sandy.
--Working with the American Red Cross to ensure public health safety measures were in place and coordinated at shelters in New Orleans in the aftermath of Hurricane Katrina.
--Assisting the Earthquake Engineering Research Institute with detailed studies of hospital damage after earthquakes in Chile, New Zealand and Mexico, so that public health authorities can develop measures that may prevent similar damage and disruption at U.S. hospitals.
--Working with the U.S. Centers for Disease Control and Prevention (CDC) on a study of the public health effects of the Deepwater Horizon oil spill disaster in the Gulf of Mexico in 2010.
--Co-leading an independent assessment of the U.S. government’s response to the Haiti earthquake. The study was sponsored by the U.S. Department of State.
Patrick Elmes, staff liaison  for ACEP’s Disaster Preparedness and Response Committee, which reviewed nominations and selected Kirsch for the award, said that the committee was very impressed when it began looking at all the high-level research and “on-the-ground” work Kirsch had done in the field.

“He’s really advanced the science and he’s put himself right in the middle of some of the biggest disasters of our time and then shared what he’s learned very widely,” Elmes said.

To learn more about Dr. Kirsch:

Center for Refugee and Disaster Response