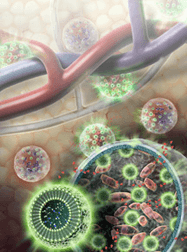 Nanosensors (green spheres) are composed of fat and L-arginine molecules, as well as separate indicator molecules that give off MRI-detectable and light signals when cells are alive. Nanosensors are enclosed in a hydrogel membrane along with liver cells (pink). Nutrients and other relatively small molecules (red) are able to travel across the hydrogel membrane to and from the bloodstream.
Credit: Sayo Studios

Researchers at Johns Hopkins have devised a way to detect whether cells previously transplanted into a living animal are alive or dead, an innovation they say is likely to speed the development of cell replacement therapies for conditions such as liver failure and type 1 diabetes. As reported in the March issue of Nature Materials, the study used nanoscale pH sensors and magnetic resonance imaging (MRI) machines to tell if liver cells injected into mice survived over time.

“This technology has the potential to turn the human body into less of a black box and tell us if transplanted cells are still alive,” says Mike McMahon, Ph.D., an associate professor of radiology at the Johns Hopkins University School of Medicine who oversaw the study. “That information will be invaluable in fine-tuning therapies.”

Regenerative medicine advances depend on reliable means of replacing damaged or missing cells, such as injecting pancreatic cells in people with diabetes whose own cells don’t make enough insulin. To protect the transplanted cells from the immune system, while allowing the free flow of nutrients and insulin between the cells and the body, they can be encased in squishy hydrogel membranes before transplantation. But, explains McMahon, “once you put the cells in, you really have no idea how long they survive.” Such transplanted cells eventually stop working in most patients, who must resume taking insulin. At that point, physicians can only assume that cells have died, but they don’t know when or why, says McMahon.

With that problem in mind, McMahon’s group, which specializes in methods of detecting chemical changes, collaborated with the research group headed by Jeff Bulte, Ph.D., the director of cellular imaging at Hopkins’ Institute for Cell Engineering. Bulte’s group devises ways of tracking implanted cells through the body using MRI. Led by research fellow Kannie Chan, Ph.D., the team devised an extremely tiny, or nanoscale, sensor filled with L-arginine, a nutritional supplement that responds chemically to small changes in acidity (pH) caused by the death of nearby cells. Changes in the acidity would in turn set off changes in sensor molecules embedded in the thin layer of fat that makes up the outside of the nanoparticle, giving off a signal that could be detected by MRI.

To test how these nanosensors would work in a living body, the team loaded them into hydrogel spheres along with liver cells — a potential therapy for patients with liver failure — and another sensor that gives off bioluminescent light only while the cells are alive. The spheres were injected just under the skin of mice. As confirmed by the light signal, the MRI accurately detected where the cells were in the body and what proportion were still alive. (Such light indicators cannot be used to track cells in humans because our bodies are too large for visible signals to get through, but these indicators allowed the team to check whether the MRI nanosensors were working properly in the mice.)

“It was exciting to see that this works so well in a living body,” Chan says. The team hopes that because the components of the system — hydrogel membrane, fat molecules, and L-arginine — are safe for humans, adapting their discovery for clinical use will prove relatively straightforward. “This should take a lot of the guesswork out of cell transplantation by letting doctors see whether the cells survive, and if not, when they die,” Chan says. “That way they may be able to figure out what’s killing the cells, and how to prevent it.”

Potential applications of the sensors are not limited to cells inside hydrogel capsules, Bulte notes. “These nanoparticles would work outside capsules, and they could be paired with many different kinds of cells. For example, they may be used to see whether tumor cells are dying in response to chemotherapy,” he says.

The Nature Materials paper can be found here: http://www.nature.com/nmat/journal/vaop/ncurrent/abs/nmat3525.html