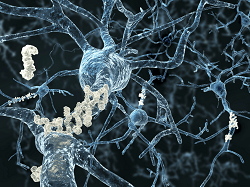 Using a novel, newly developed mouse model that mimics the development of Alzheimer’s disease in humans, Johns Hopkins researchers say they have been able to determine that a one-two punch of major biological “insults” must occur in the brain to cause the dementia that is the hallmark of the disease. A description of their experiments is published online in the journal Nature Communications.

For decades, Alzheimer’s disease, the most common cause of dementia, has been known to be associated with the accumulation of so-called neurofibrillary tangles, consisting of abnormal clumps of a protein called tau inside brain nerve cells, and by neuritic plaques, or deposits of a protein called beta-amyloid outside these cells along with dying nerve cells, in brain tissue.

In Alzheimer’s disease, tau bunches up inside the nerve cells and beta-amyloid clumps up outside these cells, mucking up the nerve cells controlling memory, notes Philip C. Wong, Ph.D., professor of pathology at the Johns Hopkins University School of Medicine.

What hasn’t been clear is the relationship and timing between those two clumping processes, since one is inside cells and one is outside cells, says lead and corresponding study author Tong Li, Ph.D., an assistant professor of pathology at Johns Hopkins. Prior studies of early-onset Alzheimer’s disease have suggested that the abnormal accumulation of beta-amyloid in the brain somehow triggers the aggregation of tau leading directly to dementia and brain cell degeneration. But the new research from Li, Wong and colleagues suggests that the accumulation of beta-amyloid in and of itself is insufficient to trigger the conversion of tau from a normal to abnormal state. Instead, their studies show, it may set off a chain of chemical signaling events that lead to the “conversion” of tau to a clumping state and subsequent development of symptoms.

“For the first time, we think we understand that the accumulation of amyloid plaque alone can damage the brain, but that’s actually not sufficient to drive the loss of nerve cells or behavioral and cognitive changes,” Wong says. “What appears to be needed is a second insult — the conversion of tau — as well.”

In humans, the lag between development of the beta-amyloid plaques and the tau tangles inside brain nerve cells can be 10 to 15 years or more, Li says, but because the lifetime of a mouse is only two to three years, current animal models that successfully mimic the appearance of beta-amyloid plaques did not offer enough time to observe the changes in tau.

To address that problem, the Johns Hopkins researchers genetically engineered a mouse model that used a tau fragment to promote the clumping of normal tau protein. They then cross-bred these mice with mice engineered to accumulate beta-amyloid. The result was a mouse model that developed dementia in a manner more similar to what happens in humans, Li says.

One implication of the new research, Wong says, is to possibly explain why some drugs designed to attack the disease after the conversion of tau haven’t worked. “The timing may be off,” he says. “If you were to intervene in the time period before the conversion of tau, you might have a good chance of ameliorating the deficits, brain cell loss and ensuing consequence of the disease.”

The work also suggests that combination therapy designed to prevent both the beta-amyloid plaque formation as well as pathological conversion of tau may provide optimal benefit for Alzheimer’s disease, the researchers say. Their mouse model could be used to test new therapies.

An estimated 5.4 million Americans are living with Alzheimer’s disease, according to 2016 statistics from the Alzheimer’s Association. There is no cure, but there are some medications that may help stabilize cognition for a limited time or help with related depression, anxiety or hallucinations.