Genes And Their Regulatory 'Tags' Conspire To Promote Rheumatoid Arthritis 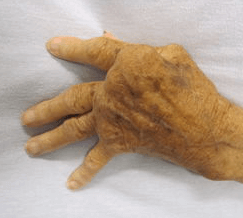 The hand of someone affected by rheumatoid arthritis.
By James Heilman, MD [CC-BY-SA-3.0 license via Wikimedia Commons]

In one of the first genome-wide studies to hunt for both genes and their regulatory “tags” in patients suffering from a common disease, researchers have found a clear role for the tags in mediating genetic risk for rheumatoid arthritis (RA), an immune disorder that afflicts an estimated 1.5 million American adults. By teasing apart the tagging events that result from RA from those that help cause it, the scientists say they were able to spot tagged DNA sequences that may be important for the development of RA. And they suspect their experimental method can be applied to predict similar risk factors for other common, noninfectious diseases, like type II diabetes and heart ailments.

In a report published in Nature Biotechnology Jan. 20, the researchers at Johns Hopkins and the Karolinska Institutet say their study bridges the gap between whole-genome genetic sequencing and diseases that have no single or direct genetic cause. Most genetic changes associated with disease do not occur in protein-coding regions of DNA, but in their regulatory regions, explains Andrew Feinberg, M.D., M.P.H., a Gilman scholar, professor of molecular medicine and director of the Center for Epigenetics at the Johns Hopkins University School of Medicine’s Institute for Basic Biomedical Sciences. “Our study analyzed both and shows how genetics and epigenetics can work together to cause disease,” he says.

Rheumatoid arthritis is a debilitating disease that causes inflammation, stiffness, pain and disfigurement in joints, especially the small joints of the hands and feet. It is thought to be an autoimmune disease, meaning that the body’s immune system attacks its own tissues, an assault led primarily by white blood cells. According to Feinberg, several DNA mutations are known to confer risk for RA, but there seem to be additional factors that suppress or enhance that risk. One probable factor involves chemical “tags” that attach to DNA sequences, part of a so-called epigenetic system that helps regulate when and how DNA sequences are “read,” how they’re used to create proteins and how they affect the onset or progress of disease.

To complicate matters, Feinberg notes, the attachment of the tags to particular DNA sequences can itself be regulated by genes. “The details of what causes a particular sequence to be tagged are unclear, but it seems that some tagging events depend on certain DNA sequences. In other words, those tagging events are under genetic control,” he says. Other tagging events, however, seem to depend on cellular processes and environmental changes, some of which could be the result, rather than the cause, of disease.

To tease apart these two types of tagging events, the researchers catalogued DNA sequences and their tagging patterns in the white blood cells of more than 300 people with and without one form of RA.

The team then began filtering out the tags that did not appear to affect RA risk. For example, if tags were seen on the same DNA sequence in those with and without RA, it was assumed that the tags at those sites were irrelevant to the cause or development of the disease. Then, from among the RA-relevant tags, they narrowed in on tags whose placement seemed to be dependent on DNA sequence. Finally, they made sure that the DNA sequences identified were themselves more prevalent in patients with RA. In this way, they created a list of DNA sequences associated with altered DNA tagging patterns, both of which were associated with RA.

Ultimately, the team identified 10 DNA sites that were tagged differently in RA patients and whose tagging seemed to affect risk for RA. Nine of the 10 sites were within a region of the genome known to play an important role in autoimmune diseases, while the 10th was on a gene that had never before been associated with the disease. “Since RA is a disease in which the body’s immune system turns on itself, current treatments often involve suppressing the entire immune system, which can have serious side effects,” Feinberg says. “The results of this study may allow clinicians to instead directly target the culpable genes and/or their tags.”

“Our method allows us to predict which tagging sites are most important in the development of a disease. In this study, we looked for tagging sites under genetic control, but similar tags can be triggered by environmental exposures, like smoking, so there are many applications for this type of work,” says Yun Liu, Ph.D., a lead researcher on the project.

The study also may shed light on how evolution works, explains Feinberg. “It seems that natural selection might not simply be selecting for an individual’s current fitness level but also for the adaptability of future generations given an unknown future. We think that certain genetic sequences may be biologically beneficial and conserved over time because they increase the amount of variation found in tagging patterns, giving individuals a greater chance of adapting to environmental changes.”

How Bees Decide What to Be