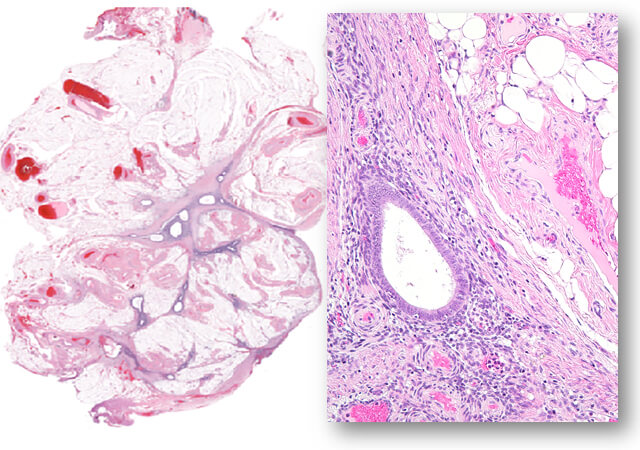 Endometriosis in the peritoneal tissue (left) forming a scar. Under microscopy, it is composed of glands and surrounding stroma with chronic inflammation and fibrosis.
Credit: Ie-Ming Shih

Using gene sequencing tools, scientists from Johns Hopkins Medicine and the University of British Columbia have found a set of genetic mutations in samples from 24 women with benign endometriosis, a painful disorder marked by the growth of uterine tissue outside of the womb. The findings, described in the May 11 issue of The New England Journal of Medicine, may eventually help scientists develop molecular tests to distinguish between aggressive and clinically “indolent,” or non-aggressive, types of endometriosis.

“Our discovery of these mutations is a first step in developing a genetics-based system for classifying endometriosis so that clinicians can sort out which forms of the disorder may need more aggressive treatment and which may not,” says Ie-Ming Shih, M.D., Ph.D., the Richard W. TeLinde Distinguished Professor in the Department of Gynecology & Obstetrics at the Johns Hopkins University School of Medicine and co-director of the Breast and Ovarian Cancer Program at the Johns Hopkins Kimmel Cancer Center.

Endometriosis occurs when tissue lining the uterus forms and grows outside of the organ, most often into the abdomen. The disease occurs in up to 10 percent of women before menopause and half of those with abdominal pain and infertility problems. In the 1920s, Johns Hopkins graduate and trained gynecologist John Sampson first coined the term “endometriosis” and proposed the idea that endometriosis resulted when normal endometrial tissue spilled out through the fallopian tubes into the abdominal cavity during menstruation.

The new study, Shih says, challenges that view. The presence of the unusual set of mutations they found in their tissue samples, he says, suggests that while the origins of endometriosis are rooted in normal endometrial cells, acquired mutations changed their fate.

For reasons the researchers say are not yet clear, the mutations they identified have some links to genetic mutations found in some forms of cancer. They emphasize that although abnormal tissue growth in endometriosis often spreads throughout the abdominal cavity, the tissue rarely becomes cancerous except in a few cases when ovaries are involved.

For the study, Shih and his colleagues sequenced — or figured out the genetic alphabet — a part of the genome known as the exome, which contains all of the genes that can be expressed and make proteins. Specifically, they sequenced the exome of both normal tissue and endometriosis tissue removed during laparoscopic biopsies on 24 women, some with more than one abnormal endometrial growth. All had deep infiltrating endometriosis, the type that typically causes pain and infertility.

Seven of the 24 women were from Japan; the rest were patients at Lenox Hill Hospital-Northwell Health in New York City. The use of samples from Japanese women was selected because endometriosis before menopause occurs more often in Asian women (13–18 percent) than in Caucasian women (6-10 percent), Shih says.

The scientists looked for mutations, or abnormal changes in the DNA, and filtered out normal variations in genes that commonly occur among humans. Of the 24 women, 19 had one or more mutations in their endometriosis tissue that were not present in their normal tissue.

The type and number of mutations varied per endometriosis lesion and between each of the women. The most common mutations, occurring in five of the women, occurred in genes including ARID1A, PIK3CA, KRAS and PPP2R1A, all known for controlling cell growth, cell invasion and DNA damage repair.

Mutations in these genes have been associated with one of the deadliest types of ovarian cancer, called clear cell carcinoma. Nickolas Papadopoulos, Ph.D., professor of oncology and pathology at the Johns Hopkins Kimmel Cancer Center, led the team that completed the first sequencing of the clear cell ovarian cancer genome in 2010.

“We were surprised to find cancer-linked genes in these benign endometriosis samples because these lesions do not typically become cancer,” says Papadopoulos, whose Ludwig Center laboratories performed the sequencing. “We don't yet understand why these mutations occur in these tissues, but one possibility is that they could be giving the cells an advantage for growth and spread.”

In an additional group of endometriosis samples biopsied from 15 women at the University of British Columbia, the scientists looked specifically for mutations in the KRAS gene, whose expression signals proteins that spur cell growth and replication. They found KRAS mutations in five of the 15 patients.

The scientists make clear that their sequencing studies may have missed mutations in some of the samples. Their data do not at this point reveal the aggressiveness of the lesions.

However, Shih says, he and his team are working on additional studies to determine if the mutations correlate with patients’ outcomes. He says a molecular test that sorts lesions as more or less aggressive has the potential to help doctors and patients decide how to treat and monitor the progression and control of the disease. “We may also be able to develop new treatments for endometriosis that use agents that block a gene-related pathway specific to a person’s disease,” says Shih.

Women with endometriosis are typically prescribed anti-hormonal treatments that block estrogen to shrink lesions. When the disease occurs in the ovaries and forms a large cyst, which increases the risk of developing ovarian cancer, the lesion is usually surgically removed.